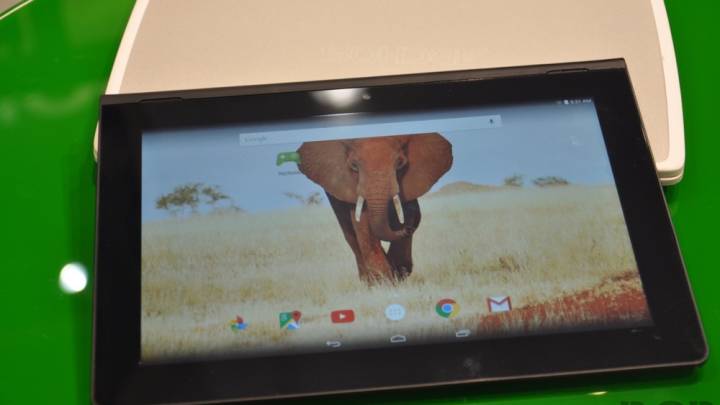 French Android device maker Archos at MWC 2015 announced the first Android tablet in the world that will have a massive 256GB of built-in storage, a new addition to its Magnus line of devices. On top of that the company also unveiled a new storage innovation at the show, called Archos Fusion Storage, that’s supposed to improve the way memory on a device is handled. Obviously, I simply had to take a look at this new Magnus model, and I was almost able to do it too.

Sadly, however, Archos did not actually have any 256GB Archos 94 Magnus tablets on display, only 128GB versions. Visually though, there are no differences between these versions. The Magnus tablet, the one I briefly handled, is snappy and quite easy to handle, though it’s not the lightest tablet you’ve ever seen, nor is it the slimmest.

In fact, the Archos 94 Magnus has a wedge-like design and is slightly thicker at the top, likely because it offers a bunch of connectivity options, including HDMI support. That, however, should not stop you from turning the device into a massive entertainment center, especially considering that it’s going to be relatively cheap compared to other devices with the same amount of storage. The tablet will cost £249 when it ships this April.

As for the Fusion Storage feature, I was told that Archos has figured out a smart way of optimizing storage and balancing available space on the built-in memory and microSD — yes, the device does come with microSD support, which means you could go even higher than 256GB of available storage. Fusion Storage basically “fuses” the microSD and built-in memory and offers the user even more space for applications and other media. In fact, the unit I tested was filled with digital content, as you’ll see in one of the pictures below.

More details about Archos’ line of Magnus tablets are available at the source link, with more hands-on images of the tablet following below.