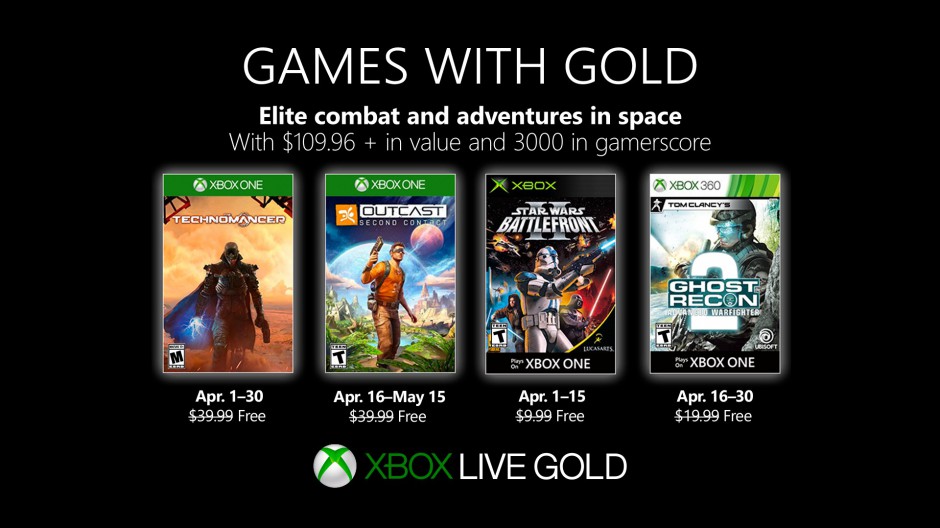 There have been so many good-to-great titles coming out in recent weeks (Devil May Cry 5, The Division 2, Sekiro: Shadows Die Twice), that you probably already blew through your allowance for video games this month. Thankfully, Games with Gold exists, and all Xbox Live Gold members will be treated to four free games in April.

It’s a bit of an odd selection though with The Technomancer — a poorly-reviewed action RPG from 2016 — being at the top of the list. But the backward compatible Xbox 360 titles help to balance out April’s Games with Gold, as Star Wars Battlefront II (the original one!) is still fun to play in 2019, and Ghost Recon: Advanced Warfighter 2 is a solid Tom Clancy shooter you can pick up once you’re burnt out on The Division 2.

You’ll save about $110 if you pick up all four games, and can add a bunch of points to your gamerscore. Also, keep in mind that each of the Xbox 360 titles are backward compatible with the Xbox One, so even if you don’t have an Xbox 360 on hand, you can still download all four games listed above. And as always, some of last month’s free games are still available if you hurry, so be sure to download them before they go back to being paid.