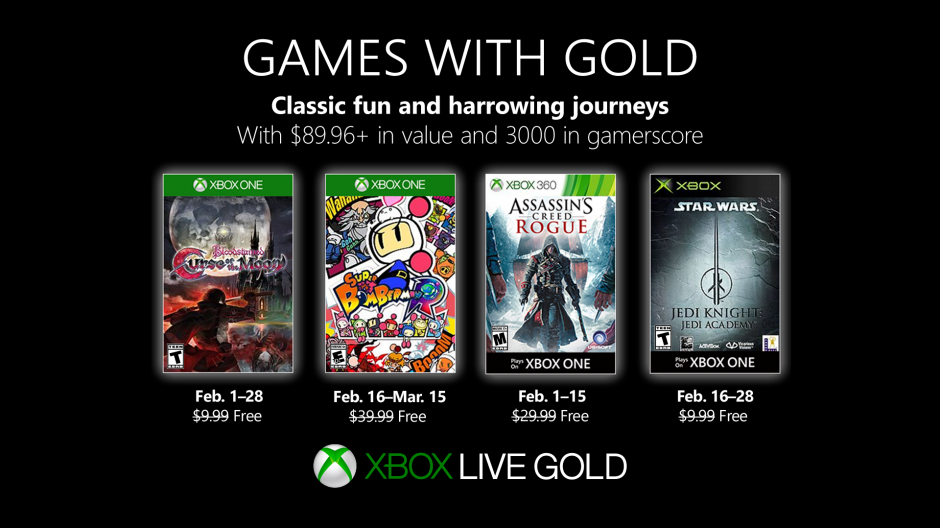 Video game publishers gave us a few weeks off to catch our breath at the start of 2019, but the release schedule just picked up in a major way as Resident Evil 2 and Kingdom Hearts III both launched within days of each other. And it’s only going to get busier from here on out, as February is packed to the gills with anticipated titles, including Anthem, Far Cry New Dawn, Crackdown 3, Metro Exodus, and Wargroove.

But what about the free games? As always, Microsoft is giving away two free Xbox One games and two free Xbox 360 games (which are backward compatible with the Xbox One) to all Gold subscribers. The highlight of February is probably Bloodstained: Curse of the Moon, though Assassin’s Creed Rogue is truly underrated.

Here are the details on the availability of all the Xbox One and Xbox 360 Games with Gold for February:

You’ll save about $90 if you pick up all four games and can add a bunch of points to your gamerscore. Also, keep in mind that each of the Xbox 360 titles are backward compatible with the Xbox One, so even if you don’t have an Xbox 360 on hand, you can still download all four games listed above. And as always, some of last month’s free games are still available if you hurry, so be sure to download them before they go back to being paid.