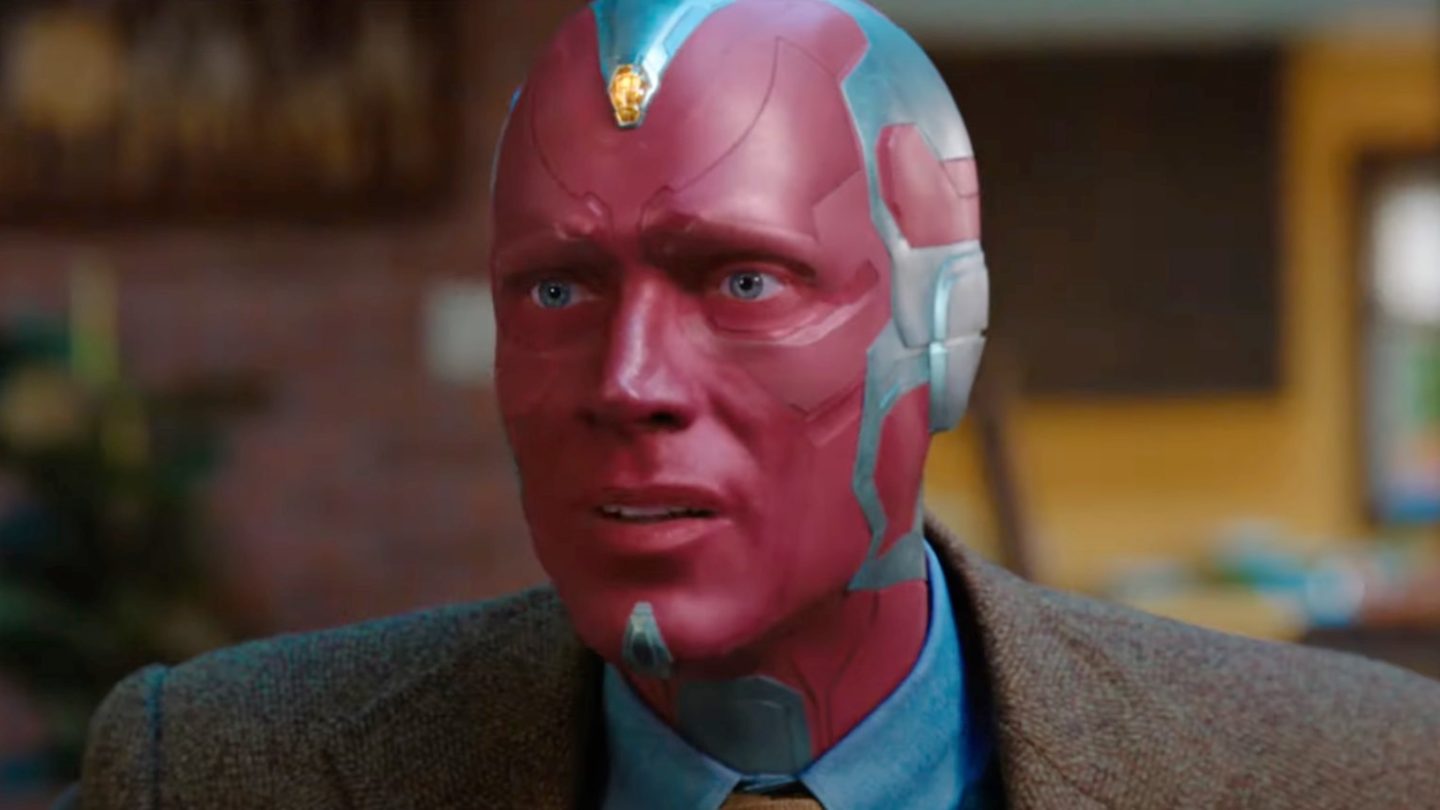 Back in March, everyone was awaiting the finale of WandaVision. Episode 9 then aired on Disney+, bringing us closer to the first MCU Phase 4 show’s finale. The episode was 50 minutes long, and, like Episode 8, stepped out of sitcom territory for good. The previous installments showed us one of the TV show’s villains, with the action picking up fast. We also saw a brand new hero getting their powers, and we saw Vision getting his explanations for the world he’s been living in.

The final WandaVision episodes introduced us to at least one character that didn’t leak. Paul Bettany, the actor who plays Vision, hyped that up in previous interviews. Elizabeth Olsen also had indicated that some surprises were in store for fans. Given that many WandaVision secrets leaked between episodes, it wasn’t a surprise that the mysterious character leaked before Episode 8. But they weren’t entirely correct. Major spoilers follow below, so you should avoid them if you want to go into the final episodes unspoiled.

We’re always warning you about movies and TV show spoilers when we’re about to report on rumors and speculations, but we’ve worked with a verified leak this time and at other times in the past. Part of the information that follows has been vetted before being published, so it’ll probably come true. Before we move to the actual leak, I’ll let you enjoy this happy couple one more time and give you time to reflect on your decision to read this massive WandaVision leak. WandaVision just this week received the distinction of one of AFI’s Television Programs of the Year, joining a rare list.

The characters that we expected to see in the coming episodes of WandaVision were Doctor Strange (Benedict Cumberbatch) and Ultron (James Spader). The former was practically a given, considering Wanda is messing with the multiverse. The latter appeared in a couple of distinct leaks, including a report that said the Ultron we’re getting differs from the one in Avengers 2.

The third surprise was supposed to be the actor that Bettany talked about in recent interviews — here’s the latest description of that person (via Esquire):

Truth is, of all of the characters we were trying to keep secret, a lot of them got out through leaks. There is one character that has not been revealed. And it is very exciting. It is an actor I’ve longed to work with all of my life. We have some amazing scenes together and I think the chemistry between us is extraordinary and fireworks on set.

Back in January, Bettany teased the show’s ending will have fans “look at the MCU in a whole new light” and understand where the MCU is heading. That was the first time he teased the mysterious actor he wanted to work with all his career:

Paul Bettany tells us that #WandaVision’s ending will cause fans to “look at the MCU in a whole new light” and teases intense scenes with a secret actor down the line.

A Reddit user posted a WandaVision leak containing two parts: verified leaks and unverified leaks. One of the Marvel Studios Spoilers subreddit mods said that the leak is “real” and verified.

BrineDude_Gaming does not explain where the information comes from. But the Redditor said that he or she saw images of White Vision, a version of Vision that fans of the comics might have expected. Those images also included the creation of the Vision within Westview:

I’ve seen images of White Vision, as well as Vision himself being created in the hex.

White Vision is in some sort of chamber with a horizontal blue-ish light. Everything has a blue-ish cool tint, honestly. He seems to be asleep / deactivated. He is, indeed, totally white.

Vision’s creation involves a bunch of magical orange lines, like beams. There’s a door right behind him in the image I have, and his (left?) arm is outstretched. It basically seems to be the precursor of what we’ve seen in the trailers. His pose is very similar.

The pose refers to the following scene from the trailers that wasn’t featured in any of the WandaVision episodes up until that point.

The same redditor also listed unverified Episode 8 leaks which walk us through the purported plot of tomorrows episode:

It shows how Agatha got her power.

Agatha and Wanda see Wanda’s past in front of them.

Suddenly a bomb comes! Wanda and Pietro hide under the bed.

It shows how Wanda got her power.

Wanda and Vision talk before their Civil War scene.

Wanda goes to the SWORD base and meets Tyler Hayward. She sees Vision’s body torn apart.

She leaves the base without the body, goes to Westview, and cries. BOOM. The hex appears.

Agatha got Wanda’s child. She’s choking them with a pink smoky rope thing in the street.

The part that explains Wanda never left with Vision’s body from the SWORD headquarters also rings a bell. We saw the storyboard art for that specific flashback scene, showing us Wanda visiting the SWORD headquarters and leaving without Vision’s corpse. A scene from the trailers that hadn’t been used so far seemed to confirm that flashbacks would come in one of the final episodes.

As we broke down in the recap of the finale, the WandaVision leak that we had expected didn’t come true. We didn’t get Mephisto. There was no Doctor Strange. But Paul Bettany did troll everyone by playing both White Vision and Vision. That mysterious actor was him.

Wanda defeated Agnes aka Agatha Harkness and turned into the Scarlet Witch in the process. Vision died and was resurrected. Monica Rambeau is a superhero. The post-credit scenes showed us Scarlet Witch in astral form reading and teaching herself Darkhold magic. This is getting us ready for her future as a villain in the MCU. If we’re to believe multiple leaks, she is going to be the villain in Doctor Strange 2.

How the leaks ended up in What If…?

After we learned more about the multiverse from Loki, What If…? came along to show us more of what we needed to know. We waited for a while to see when we’d see Doctor Strange. Turns out, he was a main character in What If…? His story was episode 4 and discussed how he uses the Eye of Agamotto to try and bring back Christine Palmer, who dies in that separate reality rather than Strange losing his hands as we’ve known from the main MCU timeline. He turns into Strange Supreme after battling different realities and becoming too powerful. He even interacts with The Watcher, so you learn how Strange can see the all-knowing entity.

Fast-forward to the final two episodes of the season. We finally get to see Ultron again. This time as Infinity Ultron. He takes all of the Infinity Stones, gets rid of Thanos in a blink, and destroys universes without even slowing to catch his breath. In the final episode, the Watcher assembles a new team, known as the Guardians of the Multiverse, to help fight the big villain (we actually got to see characters from different episodes interact with one another.) But The Watcher needed Strange to help him out as well. This is where the leaks leading all the way back from WandaVision episode 8 paid off. We finally got both Strange and Ultron in the same place, albeit in a different reality than the one we are used to. This also just whets our appetite for Doctor Strange 2.

What’s next for this crew?

The thing we are certain of for the characters from WandaVision is that we will be seeing the three main ladies again soon. Wanda is going to be the main villain of Doctor Strange 2. Monica Rambeau will be a part of The Marvels (slated for Feb. 17, 2023) and could even be seen in Ms. Marvel in 2022. Agatha Harkness will be seen in Agatha: House of Harkness, which still doesn’t have a set date for premiere.

Marvel MCU WandaVision What If...?