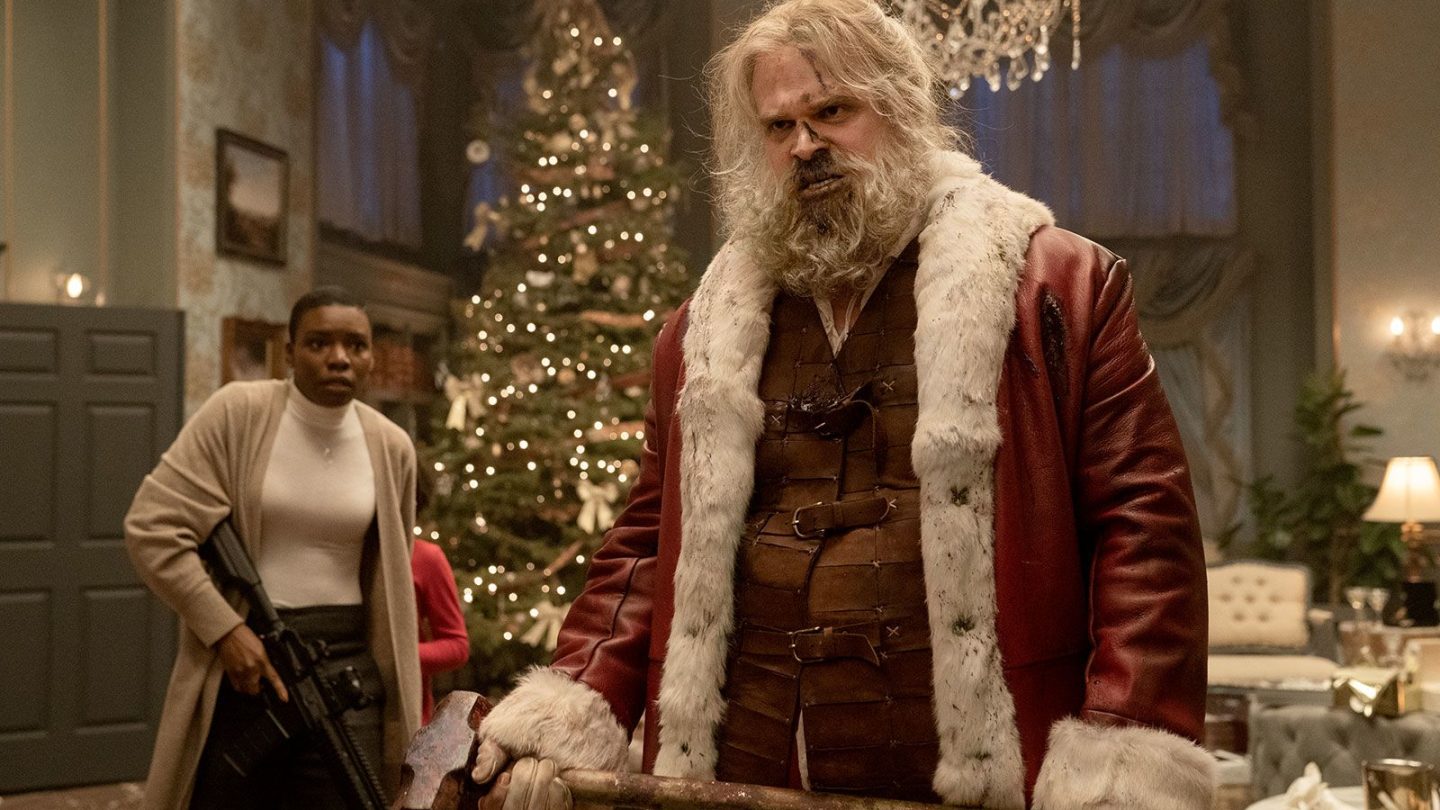 Movies like Violent Night — which stars David Harbour as a jaded, tired Santa Claus tasked with saving a wealthy family from kidnappers — have to walk a fine line. They should be in on the joke, but they can’t be so self-aware that they eliminate the stakes of the story. Save for a few stumbles, the ridiculous Violent Night manages to walk that line for nearly two hours straight. So how does it accomplish this when other movies fail so spectacularly?

From the opening moments of this violent Christmas action comedy, David Harbour — who you’ll recognize as Chief Hopper in Stranger Things and Red Guardian in Black Widow — never takes a line off. He’s just as committed to this role as any in his career, and that commitment elevates what could (and probably should) have been a forgettable B-movie.

To set the scene, Santa is fed up with Christmas. Kids are greedier than ever, and he doesn’t feel like he’s making a difference anymore. This may be the last Christmas ever, as Saint Nick weighs hanging up the coat and hat once and for all.

Everything changes when Santa gets mixed up in the kidnapping of the Lightstone family. He has to decide whether to walk away and save himself or put his life on the line to protect young Trudy Lightstone (Leah Brady) and her family. And what follows are some of the goriest and bloodiest fights you’ve probably ever seen in a Christmas movie.

I don’t want to spoil anything (yes, there are technically spoilers), but the origin story this movie gives Santa is truly, awe-inspiringly insane. Also completely worth it to set up some of the wildest fight scenes in the third act. Harbour has not lost a beat since Black Widow, and as much as his emotional gravitas sells the character, his physicality sells the fights.

Harbour’s earnestness plays especially well off of the over-the-top acting of his co-stars, which include John Leguizamo as “Scrooge” (the head of the kidnapping gang), Edi Patterson basically playing her same character from The Righteous Gemstones, and Christmas Vacation’s Beverly D’Angelo as the foul-mouthed matriarch of the Lightstone family.

My biggest knock on the movie — which entertained the heck out of me — is that it’s a touch too long. There are very long stretches where people are just talking, and Santa isn’t beating the crap out of anyone. That’s not a good use of my time or David Harbour’s. That said, it does make the inevitable beatdowns especially satisfying when they do finally happen.

Having seen A Christmas Story, Elf, How the Grinch Stole Christmas, and the aforementioned Christmas Vacation far too many times, it’s refreshing to have what could be a new entry into the canon of endlessly rewatchable Christmas movies. Plus, this is one you should only really watch after the kids go to bed, which isn’t true of most Christmas movies.

Violent Night is now available to rent or own digitally and on Blu-Ray.