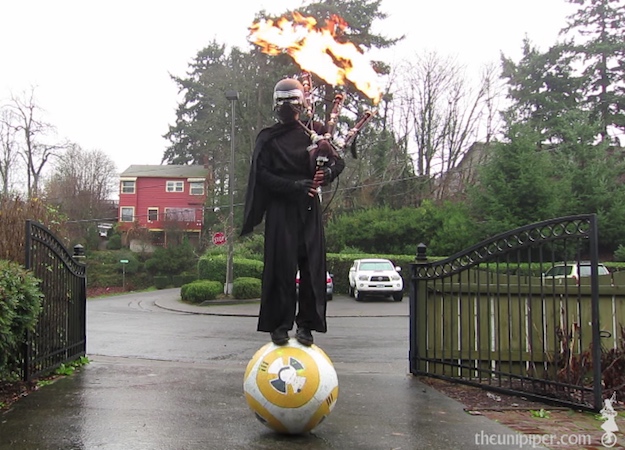 Some videos are so bizarre that they simply defy explanation. This is one of those videos. Inspired by the latest Star Wars movie, the video below features a man donning a Kylo Ren costume and playing The Final Countdown on a set of bagpipes. Towards the end of the video, he breaks out into the classic Star Wars theme song from John Williams.

Not impressed? Not to worry, there’s a whole lot more to this video than that. For starters, the man in the video plays the bagpipes while balancing atop of the BB-8 droid that was recently introduced in Star Wars: The Force Awakens. And oh yeah, did we mention that the bagpipe doubles as a makeshift flamethrower?

So while it may be hard to really describe or explain why in the world this video exists, that’s besides the point. The genius of this video lies in the fact that it makes absolutely no sense at all.

You can check it out below.

Curious about the guy behind this madness, I hopped on over to his YouTube page and discovered that he has a huge selection of videos featuring himself playing songs with his flaming bagpipes, in a wide assortment of costumes of course.

The backdrop to this video – featuring Darth Vader playing flaming bagpipes atop a unicycle – couldn’t be more fitting. Spoiler: the mystery musician is from Portland.