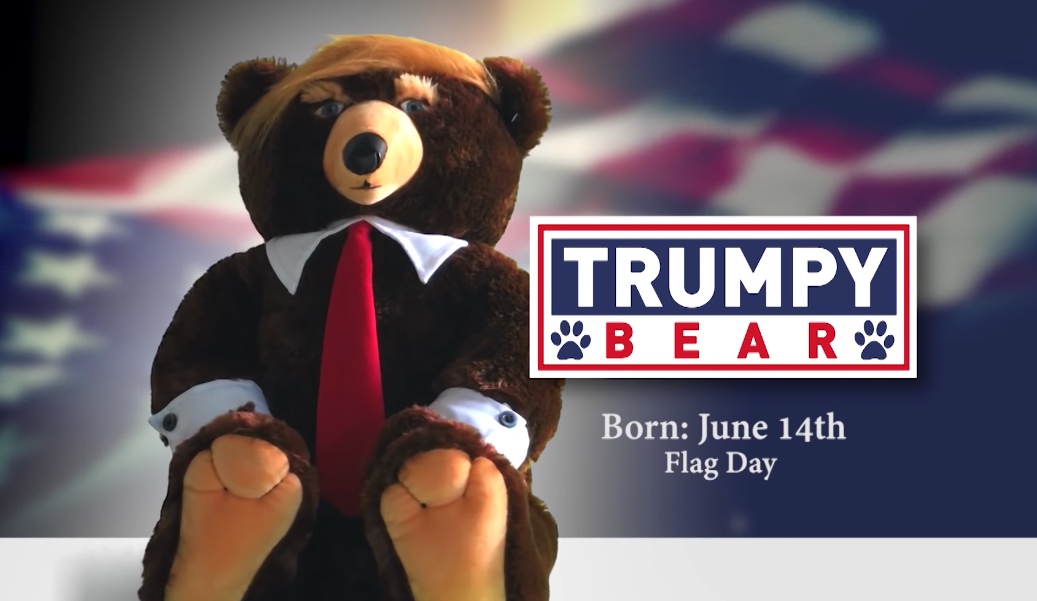 Over the weekend, an utterly bizarre and downright comical TV commercial for a Donald Trump styled teddy bear hit the airwaves. The product in question? Trumpy Bear. What is it? Well, if you must know, it’s a bear with Donald Trump-esque blonde hair and a secret zipper on the back which hides — naturally — an American flag blanket. The commercial itself is so ludicrious that you’d be forgiven for thinking it was an Onion-style parody. But as it turns out, the commercial and the product itself are both very real.

Priced at around $40, one would be hard-pressed to call Trumpy Bear a bargain, though it might make for a fun gag gift I suppose. The video itself features a number of folks talking about how Trumpy Bear enriches their day-to-day lives. Of course, once the Trumpy Bear commercial started going viral, it didn’t take long for comics to poke fun at the peculiar, and yet entertaining commercial. To this point, Jimmy Kimmel just last night lampooned Trumpy Bear during a hilarious segment on Jimmy Kimmel Live!

Kimmel’s spoof video comes out swinging and features a child holding a Trumpy Bear in front of a chain link fence.

“I was torn away from my mom at the border,” the child says, “but that’s okay, I have my Trumpy Bear. Trumpy Bear, you’re my new mom.”

The video then jumps to a scene featuring an African American male with a Trumpy Bear positioned in the front seat. “I get pulled over at least once a day for no good reason,” the man says. “But now I can make the police smile with my partner, Trumpy Bear.”

Perhaps the best part of the spoof includes a nice Vladimir Putin joke, but we don’t want to spoil all of the surprises. You can check out the full video below. It’s definitely good for more than a few laughs.