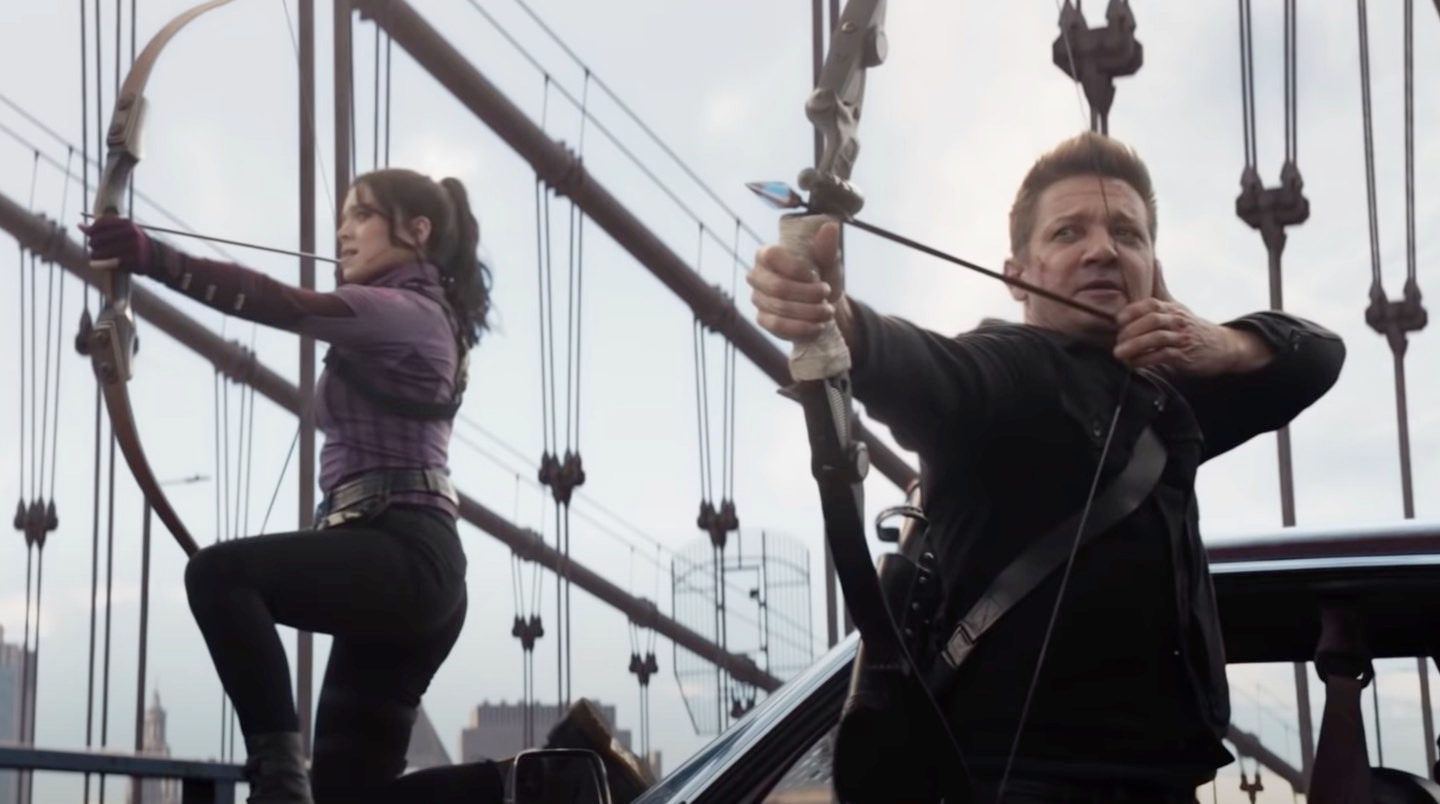 With three episodes already streaming on Disney Plus, Hawkeye has reached the halfway point. If you’ve watched the other MCU TV shows that Marvel released this year, then you know next week’s episode 4 will deliver a pivotal twist. Indeed, word on the street is that a big cameo with enormous implications for the entire MCU will appear in the Hawkeye post-credits scene next week. We’ve already seen the teasers in episode 3, and we know who that cameo might be. But equally important is the mysterious character that Marvel showed in a new promo for the TV show. And we think the new Hawkeye clip gives us our first look at the new Black Widow, Yelena Belova.

One of the great things about the Hawkeye story so far is that it pays homage to Clint Barton’s (Jeremy Renner) best friend, Black Widow. That’s Natasha Romanoff (Scarlett Johansson), of course. She died heroically in Avengers: Endgame, fighting Clint for the chance to save everyone.

We got to see Nat again in Black Widow earlier this year. But that’s a story that happens in the past, before the events of Infinity War and Endgame. You’ll want to check the official Marvel timeline of events if you’re not familiar with it. We get to meet Yelena Belova (Florence Pugh) in that prequel as well. That’s Nat’s sister and the MCU’s next Black Widow. And we did have a voice cameo from Hawkeye, but the Avenger did not appear in Nat’s movie.

Two years later, Hawkeye is still devastated after that loss, something that’s clear to the audience from the first episode. Then, Clint credits Nat with killing Ronin in episode 3. Hawkeye is obviously lying to Echo (Alaqua Cox) and the Tracksuit Mafia, but only in part. Nat did save Clint by convincing him to abandon his life as a murderous vigilante.

There’s someone else devastated after losing Nat, and that’s Yelena. And the Black Widow post-credits scene gave us a brilliant twist for Hawkeye. Julia Louis-Dreyfus’s mischievous character Val told Yelena that Hawkeye was responsible for Nat’s death. Like Clint’s lie above, that’s not entirely false. As far as everyone is concerned, Nat died on Hawkeye’s watch.

What matters here is that the Black Widow movie hinted that we’d see Yelena Belova in Hawkeye. It’s not even as big a spoiler as the character we expect in the post-credits scene. That’s because the new Black Widow’s mission is to kill  Hawkeye.

Marvel posted a new promo on YouTube that features a combination of scenes from the first three episodes. It also has some brand new footage. That’s where the new Black Widow might appear first in Hawkeye. It’s the character above who appears in a blink-and-you-missed-it moment. It’s a masked individual whose identity isn’t revealed.

The clip is too short for us to make anything of it. Not to mention that it’s cut in a way that’s meant to deceive the audience. It’s unclear if Kate Bishop (Hailee Steinfeld) refers to the mysterious character when she asks who that is.

Bishop’s line aside, we expect the character above to be Yelena Belova. She might not have received her Black Widow designation yet from the Avengers team, but she is a Black Widow by training. She’s the character we expect to take over Nat’s role in future crossovers.

Before we get to that, we’ll probably see Yelena Belova fight Hawkeye, at least until the two clear up the confusion. Yelena will surely want revenge, and attacking Clint is the way to go.

New Black Widow cameo aside, the Hawkeye promo contains one other exciting scene. At some point in the clip, there’s a lot of electricity in the background. Could that be tied in any way to the events in No Way Home, where we’ll see Electro (Jamie Foxx) again? This one might be a bit of a reach, but rumors say the two projects are somehow connected.

On the other hand, the voiceover tells us that the biggest surprises are yet to come just as the camera moves between the electricity, the KingPin teaser from episode 3, and Yelena Belova. Hawkeye episode 4 premieres next Wednesday on Disney Plus.