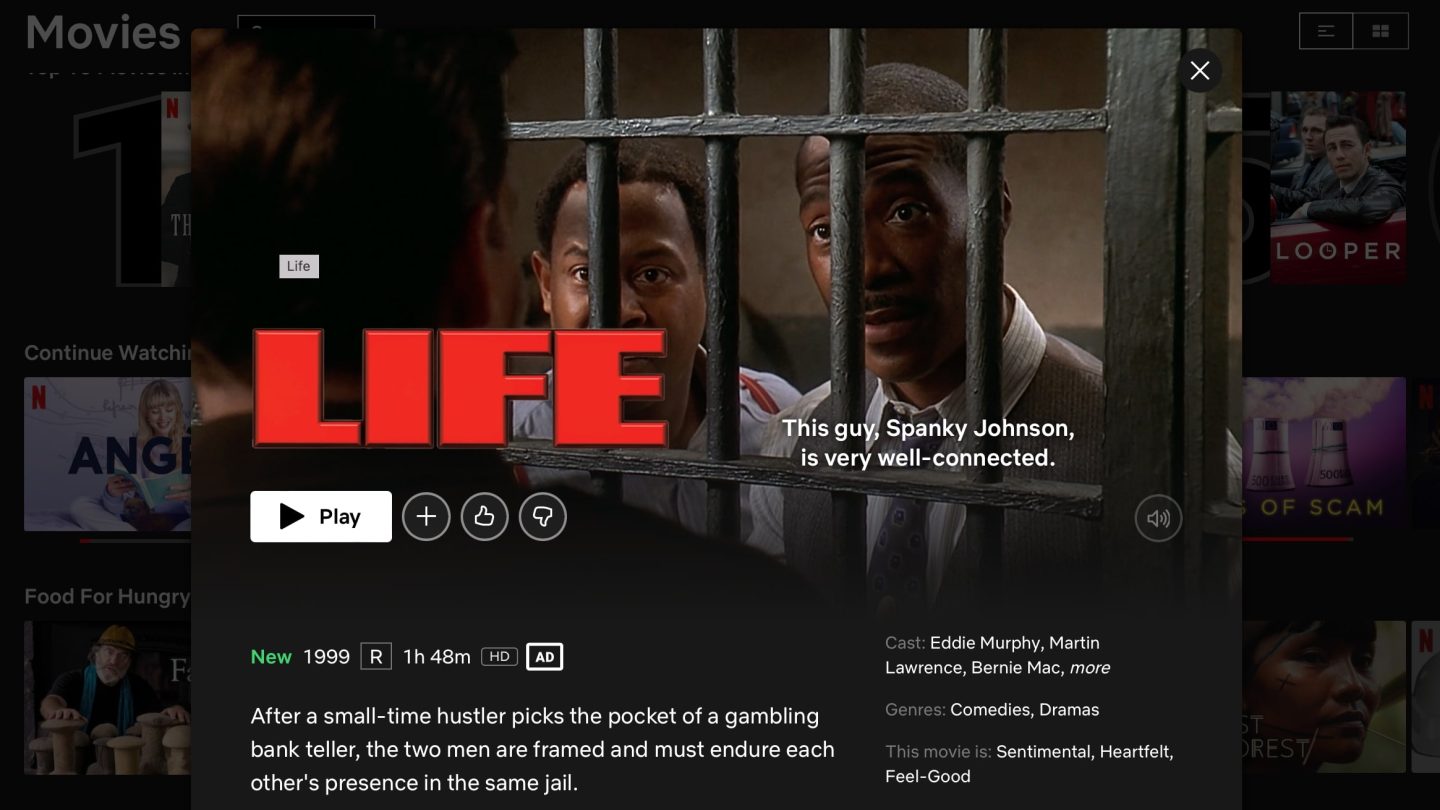 The #1 movie on Netflix in the US right now is no surprise whatsoever. It’s the new Benedict Cumberbatch cowboy drama, The Power of the Dog, which has critics positively rapturous and all kinds of awards buzz surrounding it. If you look a little farther down Netflix’s Top 10 list of movies for the US right now, however, some surprises jump out at you. Like the Eddie Murphy movie currently sitting at #3, right behind Netflix’s new Christmas rom-com Single All the Way.

The movie we’re referring to is Life, which has actually been one of the top titles on Netflix for days now. And which is currently beating out the Netflix original Red Notice — the streamer’s biggest original movie ever.

In case you’ve forgotten what this one is about — or never got around to seeing it at all — here’s Netflix’s summary. “After a small-time hustler picks the pocket of a gambling bank teller, the two men are framed and must endure each other’s presence in the same jail.”

It’s certainly a throwback to another era. One where cinemas and multiplexes were packed with all kinds of theatrical fare, from indies to comedies to big-budget blockbusters. And the rows of cushy chairs, of course, were filled with cinemagoers. Now? It seems like Netflix is one of the last places to enjoy this kind of thing. With Hollywood increasingly deciding that it’s not worth it to risk money on anything but known IP with a guaranteed big payoff.

Back in the day, though, there was a ton of this kind of content. Enjoyable, and forgettable. Which is to say, this Eddie Murphy classic wasn’t, ah, the most critically well-received of titles in the comedian’s catalog. Over at Rotten Tomatoes, for example, it currently has a 50% critics score. That’s based on 54 reviews. Audiences, nevertheless, loved it. Life’s audience score on Rotten Tomatoes is 77% — based on more than 50,000 user ratings.

If you want to check this one out on Netflix, though, you don’t have a lot of time. It’s currently scheduled to roll off the streamer after December 31. Of course, if you wanted to, you could also rent or buy it via video on demand sources like iTunes and Video, since it’s also available there.

Meantime, the latest composition of Netflix’s Top 10 movies list for the US has plenty of other suggestions for what else to watch right now. You know, once you’re finished with this Eddie Murphy gem — or if it’s not your style, and you need a different recommendation.

We’re still a few weeks out from Christmas, but, as you can imagine, holiday-themed movies are pretty in-demand among Netflix users at the moment. There are three of those currently on the Top 10 list, which you can check out in full below.

Interestingly, the majority of what you’ll find below is third-party content. Not, in other words, Netflix original movies. Netflix’s Top 10 TV show list, on the other hand, is another story (the streamer’s originals utterly dominate that one).