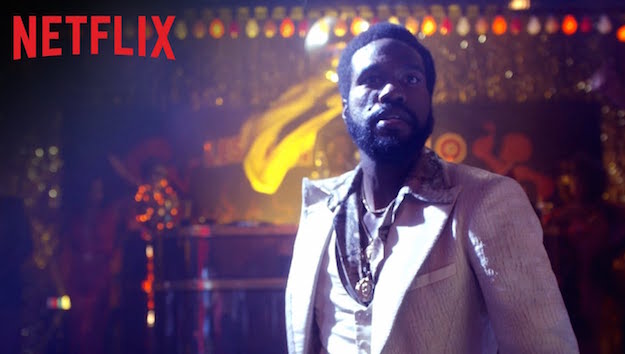 If you’ve finished binge watching Stranger Things and are on the hunt for a new show to get into, Netflix’s new show The Get Down may be worth checking out. Released earlier today, The Get Down is a Hip Hop musical drama set in 1970s New York. Featuring an all-star cast, including Giancarlo Esposito (aka Gus from Breaking Bad) and Jimmy Smits, it’s worth noting that the show was conceived by Baz Luhrmann and The Shield creator Shawn Ryan.

If the name Baz Luhrmann doesn’t sound familiar, chances are you’re already familiar with his work as he previously wrote and directed films like The Great Gatsby and Moulin Rouge!.

The entire series is 12 episodes long but only 6 are available for viewing now. That said, the latter half of the season will likely air sometime in 2017. The entire production reportedly cost $120 million to produce so it will be interesting to see if the show will become yet another breakout hit for Netflix. As to the overarching plot of the series, The Get Down aims to give viewers a fictionalized and musical take on the early roots of Hip Hop.

Set in the 1970s Bronx, The Get Down is a fictionalized account of the birth of hip-hop, as told through the eyes of a group of African-American and Latino teens. As with most Luhrmann films, it’s an odd mix of other films, from Singin’ in the Rain and West Side Story to Super Fly and just about any movie you can name where Judy and Mickey decide to put on a show. And yet, thanks to the involvement of some true hip-hop pioneers including Grandmaster Flash and musical historian Nelson George, the project is suffused with authenticity and affection.

As for critical and fan reception to the new series, reviews thus far are something of a mixed bag. To wit, The Guardian writes that the show goes downhill after episode 1.

It is a fast-paced and original 90-minute premiere – the first of six episodes that Netflix will release on Friday, with six more to follow in early 2017 – but without Luhrmann behind the camera (he directs the first episode and oversees the rest), it loses considerable steam. If it takes two to make a thing go right, Luhrmann must be a crucial element of that pairing, because the other episodes are definitely not out of sight.

There are a lot of great things in The Get Down and some fantastic musical performances – I rewatched Mylene’s disco number in the second episode several times – but it’s just not sure what it wants to be. It’s trying to tell the untold story of hip-hop and equating it to American history, racial tensions and urban blight, but its constant shifts in tone and pace seem like too many samples jammed together without making a coherent song. The audience should expect nothing less from Luhrmann, a maximalist if there ever was one, and he does come close to delivering something as original, brilliant and vital as Hamilton. If only he had the same restraint as Lin-Manuel Miranda, then his myth-making series might be legendary in its own right.

For anyone curious or intrigued, a trailer for the new series can be viewed below.

Netflix The Get Down