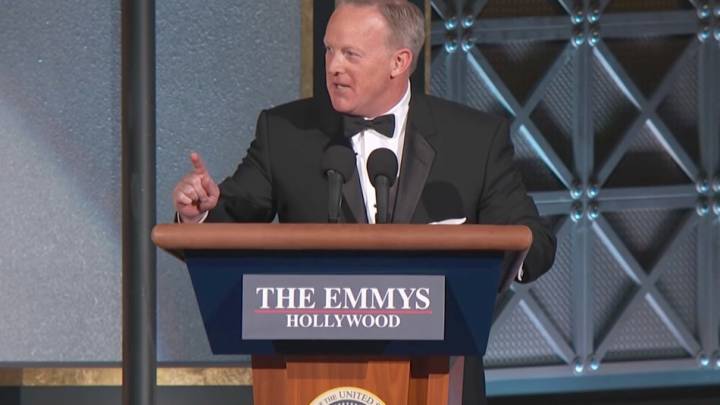 Stephen Colbert hosted the 69th Emmy Awards last night, and as expected, many of his jokes targeted Donald Trump during his opening monologue. But the best part came right at the end of the segment when Stephen Colbert brought out not other than former White House press secretary Sean Spicer.

The audience was amazed to see Spicer make his entry, complete with a mockup podium similar to his old one, and the one SNL used for Melissa McCarthy’s incredibly hilarious Spicer impersonation.

Now that he’s not working for Trump, Spicer joined the fun, mocking his former employer by paraphrasing the first signature Spicer moment as press secretary.

“This will be the largest audience to witness an Emmys, period, both in-person and around the world,” Spicer said. IF you’ve been following the tumultuous career of Spicer and his former employer, then you know the joke is based on the first traumatic moment for the Trump presidency, when Spicer was forced to defend the inauguration crowd and lie about it.

Colbert made the entire Spicer bit even better by saying “Melissa McCarthy everyone!” But to actually enjoy the moment, you have to watch it yourself and look for the shocked faces in the audience, including McCarthy.