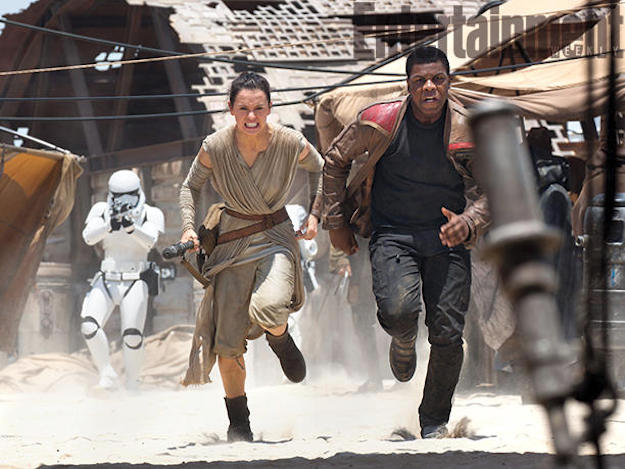 Before we talk about Rey, the bold new hero of the Star Wars saga, you should know there will be plenty of spoilers in this article. There’s really no way around it, so don’t read on if you haven’t seen Star Wars: The Force Awakens yet.

And see the movie as soon as you can.

Just as many critics said in their spoiler-free reviews, J.J. Abrams’ Star Wars universe feels familiar because of the many tie-ins with the original trilogy. Even so, the movie tells a compelling story that newcomers will appreciate as well.

The main character of The Force Awakens is Rey, a daring young girl who embarks on the adventure of a lifetime. If you’ve seen the movie, you already know that Rey quickly learns the Force is strong in her. Seemingly without any training, she’s able to resist Kylo Ren, perform Jedi mind tricks on others (in this particular case a Stormtrooper played by none other than Daniel Craig), and use the lightsaber that belonged to Anakin and Luke Skywalker.

Moreover, Maz Kanata hints that she might know who Rey is: “I have lived long enough to see the same eyes in different people. I see your eyes… I know your eyes!” Maz says to Rey upon meeting her.

The simplest theory might be that Rey has to be a Skywalker considering her abilities with the Force. The mysterious meeting at the end, between Luke and Rey, might turn out to be the place where Rey finds out who she really is. Abrams doesn’t tell us in this episode, but the evidence seems to point to her being Luke’s daughter. That would make her Kylo Ren’s cousin, as the new Darth Vader is the son of Leia and Han Solo – Ben Solo.

But what if she’s Leia and Han’s daughter? Business Insider points out that one of the most prolific writers on Star Wars theory, Helge Kåre Fauskanger, has an answer to this Quora question. He too believes that Rey is either Luke or Leia’s daughter, although he seems to have a preference for the latter.

“Vader fanboy Kylo Ren was originally Ben Solo, the son of Han and Leia, who fell to the Dark Side,” he says. “This sounds like a reimagining of the fate of Jacen Solo from the no-longer-canon novels. Jacen had a sister called Jaina, and it would be tempting to assume that if Kylo/Ben is the reimagined Jacen, Rey is the re-imagined Jaina who will eventually turn out to be the sister of Kylo/Ben. If so, she is the daughter of Han and Leia.

“All we know is that Rey has truly remarkable Force powers (once she learns she has the gift, she pulls off a mind trick and full-blown telekinesis with no training whatsoever!) So she is probably a Skywalker, the child of either Leia or Luke,” he says.

But if she’s Leia and Han’s daughter, why wouldn’t they tell Rey during the course of the movie? And if it’s because they simply don’t know, why wouldn’t they remember their own daughter? They certainly seem interested in turning Kylo back into Ben, so they’d probably be thrilled to be reunited with their long-lost daughter.

On the other hand, what would you rather have Kylo Ren say to Rey next time they fight — that he is her brother? Or that he is her cousin? Obviously, seeing cousins fight it out in Episodes VIII and IX rather than brothers is not even remotely as interesting as epic family conflicts such as Darth Vader vs. Luke and Han Solo vs. Kylo Ren.

That said, you can read more of Fauskanger’s comments on Star Wars on Quora.