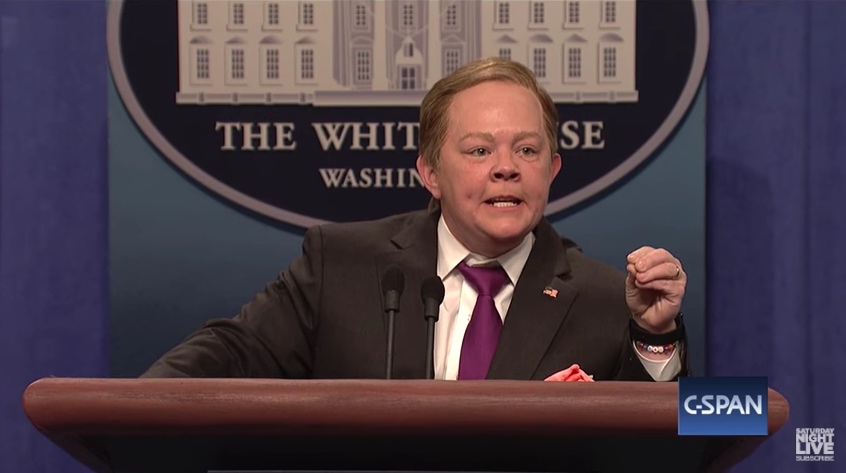 Given how popular Melissa McCarthy’s portrayal of Sean Spicer was last week, Saturday Night Live figured there was no reason to mess with a working formula and try something new. So to kick off the most recent episode, hosted by Alec Baldwin, McCarthy was back at the podium this week delivering the goods.

Starting out with a few mediocre jokes about Spicer’s penchant for gum chewing, the sketch eventually picked up steam once Spicer began fielding questions from a group of reporters.

Predictably, many of the questions focused on Trump’s controversial travel ban, a strategy that Spicer attempted to explain by using toys as illustrative examples. Harping on extreme vetting, for example, Spicer said that a person like Barbie, with her blonde hair, would be an automatic in.

“She’s blonde, so she gets in!” an amped up Spicer exclaimed.

Meanwhile, someone with darker skin, like the Polynesian character Moana, would be subject to an entirely different set of rules.

“We’re gonna pat her down,” Spicer said excitedly, “and then we’re gonna read her emails, and then if we don’t like her answers — which we won’t– BOOM! Guantanamo Bay.”

Later on, Spicer gives up the stage to make way for Jeff Sessions played masterfully by Kate McKinnon, who incidentally, seemingly has more range than any other cast member on the show.

The full clip can be enjoyed below.

Funny enough, there have been rumblings that the Trump administration is none too pleased that SNL has opted to have a woman impersonate Spicer.

Trump may not be a fan of the show, but the show’s ratings tell an entirely different story. To wit, our sister site Variety relays that this weekend’s episode anchored by Alec Baldwin was the highest rated SNL episode in six years.