Later tonight, the second presidential debate between Donald Trump and Hillary Clinton will take place in a highly anticipated town hall format at Washington University in St. Louis. The debate may very well set new TV viewing records given all of the recent controversy surrounding recently unearthed comments Trump made about women back in 2005. In fact, we already know that the first set of questions will focus on Trump’s lewd comments, with Clinton slated to answer first.

If the first presidential debate was any indication, tonight’s debate should be even more riveting, dramatic and, dare we say, loony. To help you have a little bit of fun with what promises to be a captivating – if not downright bizarre –  event, we’ve put together a little presidential debate drinking game that was carefully designed to get you a little bit tipsy without getting completely wasted.

After all, given all of the nonsense that will likely be on deck later tonight, you probably want to remain somewhat alert as to fully appreciate what might very well be a trainwreck for the ages. To that point, if there’s anything that the first presidential debate taught us, it’s to expect the unexpected.

So without further ado, here’s a handy drinking game you might want to keep on standby later tonight. Note that a drink, for purposes of this game, is a shot or a full beer. If America has to suffer through another debate, well, apparently so does your liver. 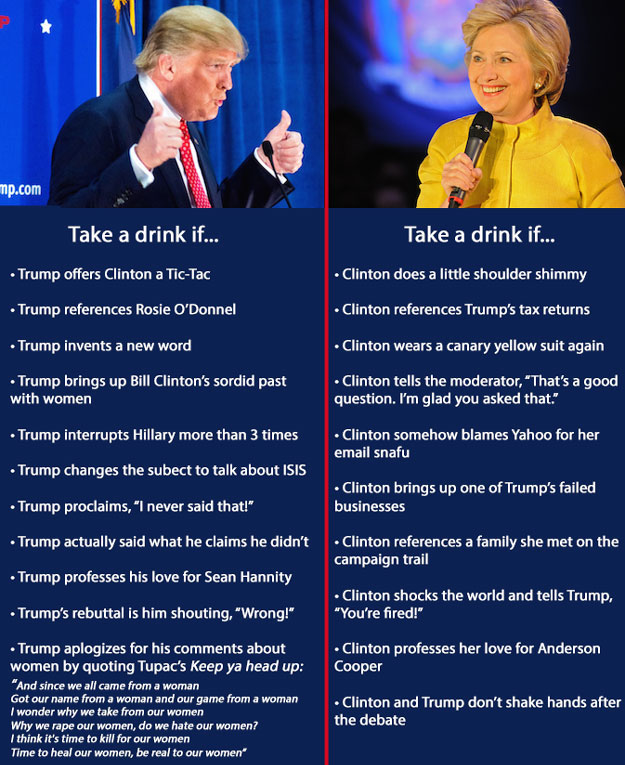