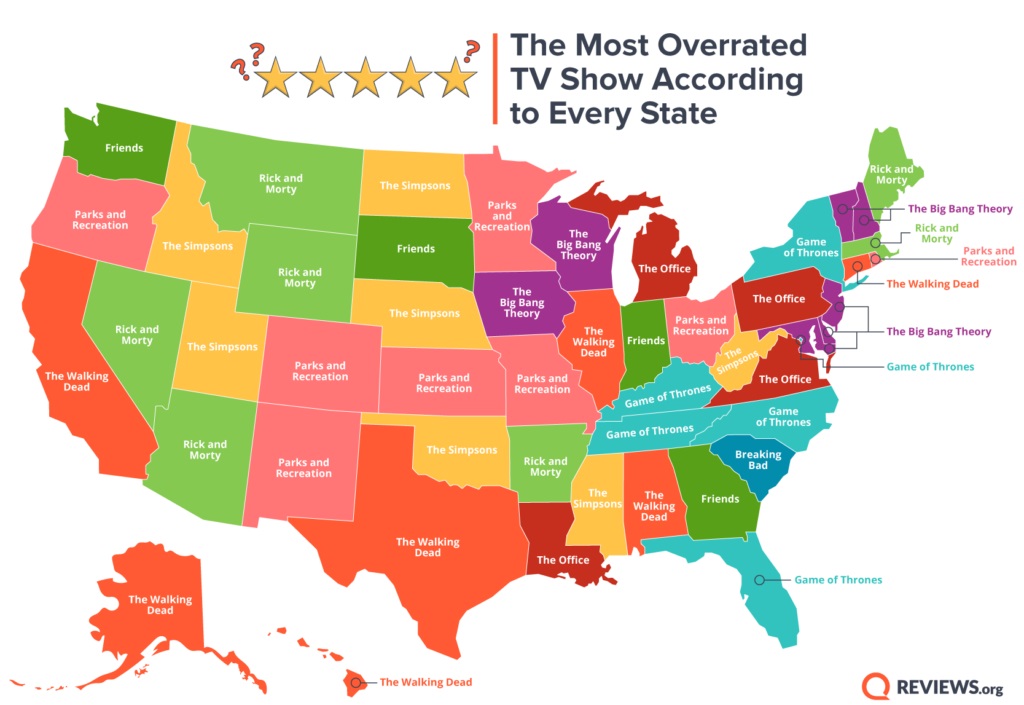 Some of us have a show or two that we just don’t get. No matter how many awards it won or how many top 10 lists it appears on, you cannot figure out why everyone loves this television series as much as they do. And whether you are incredibly vocal about your disinterest or even disdain for the show in question, or prefer to keep it a secret, you know that you’ll never feel the same way other people feel about it. It turns out that you’re not alone.

Last week, Reviews.org put together a revealing graphic of the most overrated show in all 50 United States based on responses to an online survey. Unless you’ve been living under a rock for the last ten to twenty years, you’ll probably recognize every show on the graphic, but you might not agree with the results.

Three shows that I expected to see before I even saw the map were Game of Thrones, The Office, and The Walking Dead, which have arguably been three of the biggest shows of the last two decades in terms of popularity and critical acclaim. Interestingly, all three shows seemed to lose steam eventually, from the disastrous final season of Game of Thrones to the disappointing late years of The Office to… whatever The Walking Dead has been doing for the past several years. All three were the most overrated show in at least four separate states.

The biggest surprise was Parks and Recreation, which was the most overrated show in eight states — more states than any other show. As the site explains, if this were a vote decided by the states, Parks and Rec would be elected America’s most overrated show of all time. But when it comes to the popular vote, Rick and Morty is actually on top. According to Reviews, 58% of respondents to the survey said the Adult Swim cartoon is overrated.

In case you’re curious about the methodology behind this survey, here’s what Reviews.org has to say about it:

First, we sourced a list of the most-watched TV shows of all time from IMDB. Using that information, we conducted an anonymous survey among Americans 18 and older with a sample error of ± 4.5% and a 95% level of confidence. In states where enough responses were received to represent the population, we highlighted the television show with the highest majority of respondents indicating they believed the show was overrated.

In states where there were not enough respondents to make a fair determination, or in the event of a tie, we weighed the most overrated show according to the state’s US census region against low search intent in Google Trends.

Here are some other fascinating tidbits from the survey about your favorite shows:

Finally, I’d just like to note that everyone who says Parks and Recreation is overrated is a lunatic.