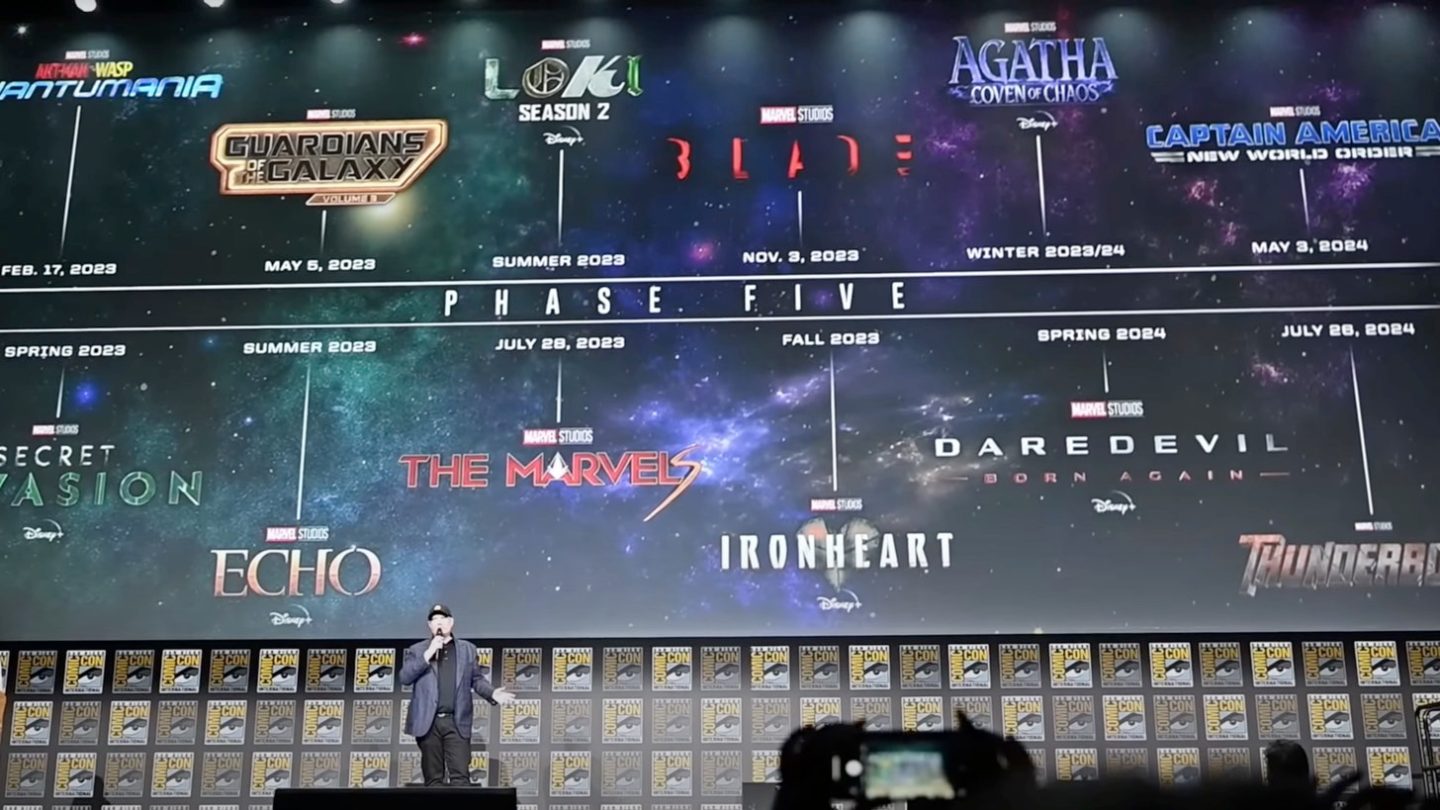 Marvel’s MCU Phase 4 chapter has ended with The Guardians of the Galaxy Holiday Special on Disney Plus. MCU Phase 5 and 6 will conclude the Multiverse Saga, with the final project hitting theaters in early May 2026. That’s the big Endgame-like conclusion of this saga, Avengers: Secret Wars.

While Marvel has revealed plenty of titles from Phases 5 and 6, some secrets still remain, with Spider-Man 4 being one of them. And there’s a new twist that MCU fans need to be aware of. Disney is looking at making a few significant changes to the MCU Phase 5 and 6 projects now that Bob Iger is back as Disney CEO.

This is all according to a new rumor, and it’s mostly good news for the fans. Mind you, some spoilers might follow.

Deadline first reported Disney’s restructuring plans a few days ago. The company announced the “organizational and operating changes” in its latest SEC filing.

It’s unclear what those changes might be, but Marvel is a big part of Disney’s success. And the MCU has been at the core of Disney Plus, providing plenty of original content via Phase 4 TV shows and movies. But Marvel alone can drive up Disney Plus revenue by convincing fans to subscribe.

The Cosmic Circus has also heard about changes that Marvel wants to make to the MCU now that Bob Iger is back.

The MCU Phase 4 is almost as big as the entire Infinity Saga. Marvel made 23 movies over 11 years, culminating in Infinity War and Endgame. The introduction of Disney Plus allowed it to produce 19 projects that premiered in theaters and/or streaming in the past two years: 8 Disney Plus series, 7 movies, 2 Disney Plus Specials, and 2 shorts.

MCU Phase 5 and 6 also feature a large number of projects that should launch similarly (in theaters or online). And the two phases should be done in four years.

However, the MCU Phase 4 content hasn’t been as great as the Infinity Saga. The report notes the quality issues that Marvel is aware of:

There have been issues with editing and pacing, incongruencies with scripts and stories, and problems with the visual effects of several projects. All of these issues and more are a result of the larger problem involving increased releases.

We’ve repeatedly pointed out the plot holes in various movies and TV shows, hoping Marvel would fix them. As for the visual effects, that’s a problem many fans might have ignored, but it’s clearly there.

How Marvel plans to fix MCU Phase 5 and 6

The blog notes that sources familiar with Marvel’s plans say the studio is reevaluating the release lineup for the MCU Phase 5 and 6. Marvel wants to avoid handling the upcoming chapters like Phase 4.

As a result, Marvel and Disney are reevaluating future releases focusing on a quality-over-quantity approach.

For future releases, Disney might develop “a sort of creative oversight” on Marvel Studios. Moreover, Special Presentations might grow as a distribution method for more projects. In Phase 4, we had two of them, Werewolf by Night and Guardians Holiday Special.

Disney will take even more drastic measures with Phase 5 and 6 titles. The MCU projects that are in post-production will be released according to schedule. But titles in pre-production will go through a re-evaluation.

Disney and Marvel might make some release date changes to the current schedule for some projects. Others might see media format changes. In the most extreme cases, the studios will go for delays and cancellations, although such measures seem unlikely.

We have already seen at least one such change, but it happened before Iger’s return. Marvel turned the Armor Wars TV show into a full-fledged MCU movie. Also, Marvel made a few changes to its MCU Phase 5 and 6 release schedule. It might make others once Spider-Man 4 is official.

Separately, a recent rumor claimed that the Scarlet Witch wouldn’t get a standalone movie. That’s just a rumor, but one that dropped around the same time The Cosmic Circus released its report.

We might lack specifics, but Disney and Marvel improving the MCU Phase 5 and 6 quality is undoubtedly an exciting rumor.