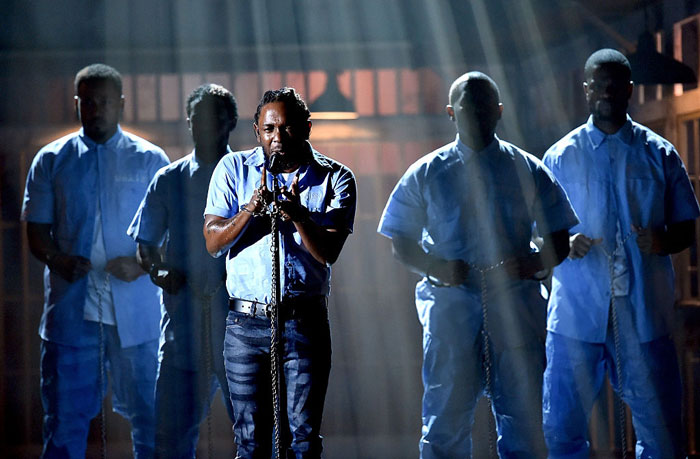 Kendrick Lamar isn’t just someone who can crank out critically acclaimed albums from the comforts of the studio — he’s also an incredibly compelling live performer. At last night’s Grammys, Lamar showed off his performance skills with an intense performance of two tracks off his last album To Pimp a Butterfly, which won the Grammy for Best Rap Album and was nominated for Album of the Year.

FROM EARLIER: What is the mysterious ‘other’ storage that’s clogging up your iPhone?

The performance began with Lamar dressed in prison garb and chained to several other performers who marched with him onto the stage. He then launched into a ferocious rendition of “The Blacker the Berry” before subtly transitioning to “Alright,” which was the biggest hit from To Pimp A Butterfly.

Lamar’s fellow musicians were positively blown away by the performance and they let him know it on Twitter:

@kendricklamar has made me the most proud for HIP HOP in a very long time!!!… https://t.co/iTFuuaMfkx

@kendricklamar THAT WAS SO POWERFUL.

Check out a video of the full performance below. It really does live up to the hype.