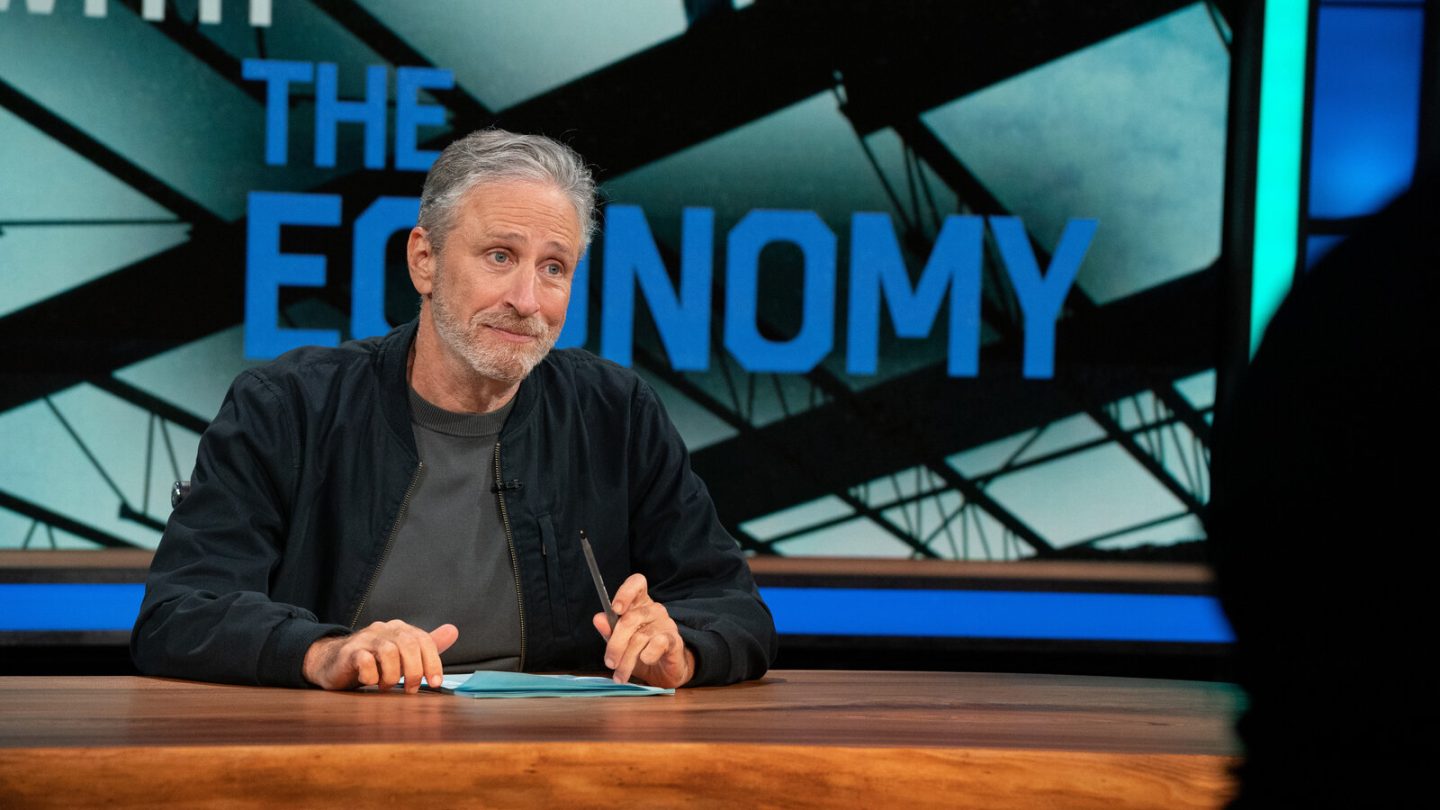 Ahead of his Apple TV+ show returning in March, for which he also hosts a companion podcast, Jon Stewart has just waded into the controversy surrounding Spotify and Joe Rogan. To be sure, there’s been more than enough written and said about all that already. But the interesting thing is that Stewart’s comments about the affair — they might actually surprise you.

Stewart’s comments about Rogan, which came during the most recent episode of Stewart’s The Problem With Jon Stewart podcast, were enlightening for a number of reasons. Not the least of which is that, amid this controversy that’s seen musicians like Neil Young angrily pull music off of Spotify, the erstwhile Daily Show host actually has something more substantive to say than the reductive liberal spiel that’s kept the controversy alive.

“These are shifting sands” — Jon Stewart, to Rogan critics

The host of The Joe Rogan Experience is, on one hand, the face of a podcast property so valuable that Spotify was willing to shell out $100 million for its exclusivity. The show has also given Rogan — and continues to provide him — something else incredibly valuable. His is such a high profile in popular culture, that he commands an audience exponentially greater than many of the biggest news outlets continually calling for his head.

They do so, partly because Rogan’s episodes more or less tend to keep returning to a few big narrative themes. One of which is that, as he sees it, the mainstream media is full of crap. And that, these days,  the media is full of crap especially when it comes to Covid and the pandemic. A huge audience thinks so, too, and wants to listen to Rogan talk about that. I certainly don’t, but put all that aside for a moment.

Notwithstanding the fact that Rogan has sat across from a number of problematic guests, who’ve said plenty of problematic things, Stewart has now come along to advocate a radical notion: That all of this is actually more complicated than the calls for Rogan’s cancellation would suggest.

For Stewart, it all calls to mind, for one thing, The New York Times‘ bad reporting that helped the US government justify the invasion of Iraq.

“The New York Times, right, was a giant purveyor of misinformation, and disinformation,” Stewart said of the paper pushing hard for the Iraq war back in the day. “And that’s as vaunted a media organization as you can find, but there was no accountability for them.”

Stewart’s point: Why can the Times stay, but Rogan does the exact same thing, and  — oh no, he’s got to go? “These are shifting sands. And I think I get concerned with, well, who gets to decide” what misinformation is, Stewart continued.

One of the interesting things about the Rogan situation is that it also sits at the center of so many cross-currents of news right now. And that everybody involved actually gets something out of this story. All the performative musicians beating their chest about this, for example, get to look like they’re championing … I don’t know, something, by pulling their music off the streamer.

Every news outlet that keeps writing a version of the same “Rogan is awful” piece gets to prance and preen for the crowd that wants Spotify to cut him loose. While Rogan himself gets to look like the guy standing tall against the woke mob. As I said, everybody wins.

Everyone gets to be annoying and wrong on the Internet

Well, everybody except the crowd that’s tired of the never-ending lamentations of Very Online People who, somewhere along the line, got a ridiculous idea stuck in their heads. Who, more specifically, think that the world owes them a very strange and particular obligation.

It’s that, anything that runs counter to your ideology? It must be purged from existence. Whether that’s found on Facebook, Google, Spotify, whether it emanates from Joe Rogan’s microphone — anywhere. If it contradicts, most often, liberal orthodoxy (or, God forbid, if it offends someone), it must be disappeared. It’s not enough to downrank it or ignore it. It cannot be allowed to exist at all.

Part of the beauty of the Internet, though, is not only that everyone gets to be annoying and wrong. It’s that you don’t have to rely on someone else to be your own gatekeeper. Indeed, this country will fare much better in the long run, in my opinion, if people were a little more mentally resilient. And just … quit letting whatever you hate on the Internet live in your head rent-free. Just change the channel in your own mind. Listen to Rogan, or don’t listen to him.

I’m not saying this is a free speech issue, per se. Or that whatever Rogan or whoever else wants to say — we should just let ‘er rip. Just quit kidding yourself that you’re going to scrub idiocy or all the things you find distasteful from the internet. Spoiler: You will fail. The one and only response a mature person ought to have in these scenarios? It should be to, like that godforsaken song says, just let it go.