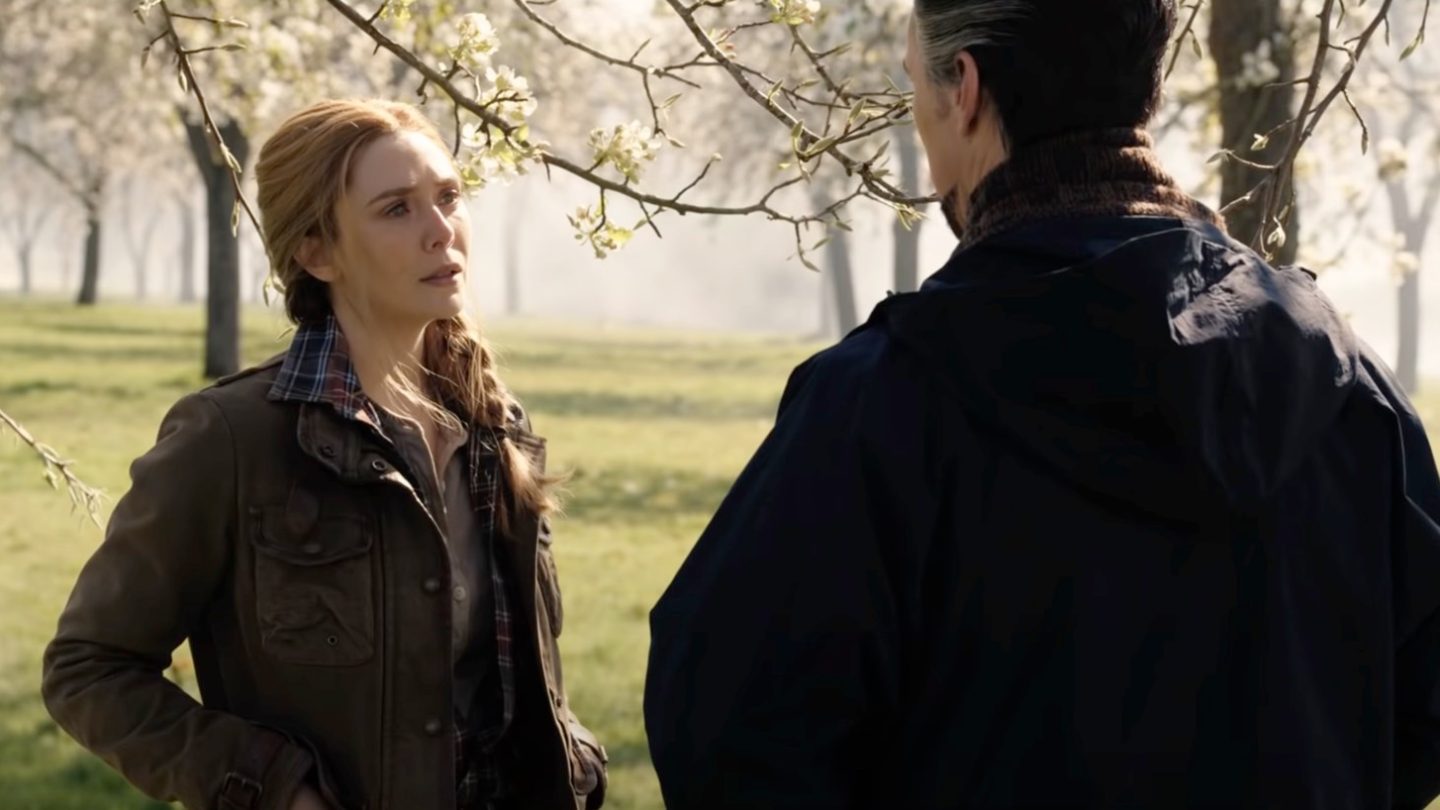 You don’t have to keep up with all the Doctor Strange in the Multiverse of Madness rumors to realize that the Super Bowl trailer has an unambiguous message. The Scarlet Witch (Elizabeth Olsen) isn’t necessarily a hero anymore in this movie, and she might battle everyone else in the film, Doctor Strange (Benedict Cumberbatch) included.

But if the two beloved Avengers are going to fight, who might come on top? Is Doctor Strange more powerful than Wanda? Or will the Scarlet Witch win? We have an early answer to that question, but you should know that Doctor Strange 2 spoilers might follow below.

Why is Wanda in Multiverse of Madness?

Cumberbatch is one of the big WandaVision cameos that Marvel cut from the TV show. As you’ll recall, WandaVision focused on Wanda’s nervous breakdown in the aftermath of Infinity War and Endgame.

The TV show also gave us a big character development for Elizabeth Olsen. Wanda has leveled up, so to speak. She is now the Scarlet Witch, a superhero who might be even stronger than the Sorcerer Supreme.

We said at the time that Wanda must be stronger than Doctor Strange. But we only learned a few months ago that it’s actually Wong (Benedict Wong) acting as the Earth’s main sorcerer.

Therefore, WandaVision isn’t enough to answer whether Wanda is stronger than Doctor Strange. It’s all a technicality, however. The Scarlet Witch should be stronger than any Sorcerer Supreme.

Wanda won’t appear in Multiverse of Madness to measure her strength against Doctor Strange. Inevitably, we’ll get there, of course. But Doctor Strange 2 is the obvious story continuation for the Scarlet Witch.

Wanda is going to be an antagonist in the movie. She’ll try to save her children using her newly acquired powers. By messing with reality once again and hopping around the multiverse, she will inevitably challenge the sorcerers tasked with protecting reality. That means Wong, Doctor Strange, and everyone else in the order.

Is Doctor Strange more powerful than the Scarlet Witch?

WandaVision was hugely popular with Marvel fans, and Wanda is a beloved Avenger. That’s to say her descent into madness will bother some fans. Rather than the hero who saves the day, she’ll be the villain for most of Multiverse of Madness.

MCU fans may already know the answer to a question that appeared after Endgame. Someone asked Kevin Feige in a Q&A session who is the strongest Avenger. His answer was Wanda, and he said it without hesitation. That’s even before we learned that Wanda was going to become the Scarlet Witch in WandaVision.

In other words, we already know that the Scarlet Witch might be stronger than Doctor Strange. Or put differently, she might have an easier time defeating him than Peter Parker (Tom Holland) did in No Way Home.

But let’s not forget that Strange has acquired tremendous knowledge about the way magic works, and he’ll be a fierce opponent.

That said, Marvel will not reveal who the stronger Avenger is while marketing the movie. But the studio is already teasing this imminent duel has a clear favorite.

Will the Doctor Strange 2 villain die?

“I don’t know who’s more powerful than Wanda,” Multiverse Of Madness producer Richie Palmer told Empire. “Meeting the Wanda Maximoff at the end of Endgame would have been a lot for Strange. Who comes out on top as the most powerful being in the universe? Maybe we find out at the end of the movie.”

We certainly expect a happy end for most of the Multiverse of Madness characters. Even if the Scarlet Witch is stronger than Doctor Strange, she isn’t likely to kill him. After all, this is the second project in the Doctor Strange franchise. We can’t expect the titular character to die.

But that doesn’t mean that the Scarlet Witch has to perish either. Even if she is the big villain. Not to mention that Marvel reportedly has more projects in the works starring Olsen.

While we wait for Doctor Strange 2 to hit theaters, there’s one more interesting detail that Palmer revealed: The relativity of madness.

“Madness has many different definitions,” Palmer said. “It’s maddening for Doctor Strange to have to watch the love of his life marry someone else. And it’s maddening for Wanda to have been told, ‘There’s a book, and there’s a chapter about you in that book you should read, and secrets you don’t know about yourself.’”

The full Doctor Strange in the Multiverse of Madness coverage in Empire will be available on newsstands beginning Thursday.