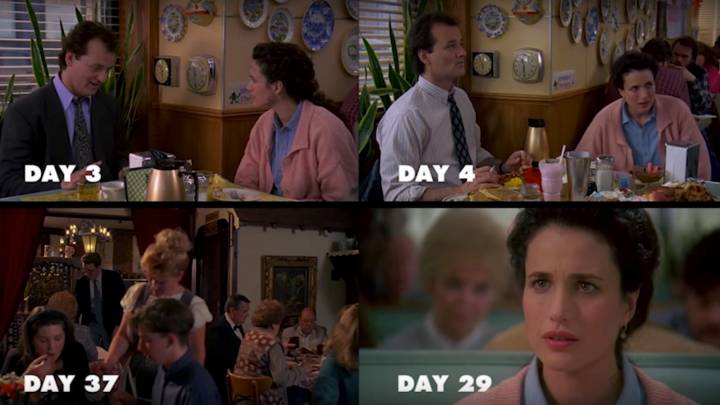 It’s Groundhog Day today, folks, which means two things. First of all, according to some groundhogs, there will be six more weeks of winter so forget about an early spring for the time being. Secondly, this is the perfect day to revisit Bill Murray’s epic Groundhog Day movie. But before you watch it again — or instead of watching the regular version of the classic flick — you should check out this special cut on YouTube that shows every day from the movie at the same time.

YouTube user Neil Fennell wanted to see what it would look like if the events in Groundhog Day all take place simultaneously.

“The film shows 37 separate days from Phil’s thousands of Groundhog Days in Punxsutawney,” he wrote. “Every frame of the movie is used from days 1-37, with the exception of a few crossfades.”

This special cut is almost 32-minutes long, which is obviously much shorter than the full movie, and it’ll show you the amazing evolution of the main character. Phil Connors, played by Murray, is an egotistical weatherman who gets to experience the same Groundhog day over and over again until he does some serious soul-searching and actually becomes a better version of himself.

Watching this special cut will show you how Connors’ behavior changes throughout the movie, with each Groundhog day he has to relive. It’ll also show you the incredible attention to detail in the movie. Connors is forced to relieve almost the same routines every day, which means everything around him happens exactly the same as long as he doesn’t interfere.

Check out the full clip below.

As for the groundhog’s prediction this year, check out this little guy’s reaction:

SIX MORE WEEKS OF WINTER! #DunkirkDave wanted nothing to do with the outdoors & actually ran inside after this. pic.twitter.com/jTXemAgICt