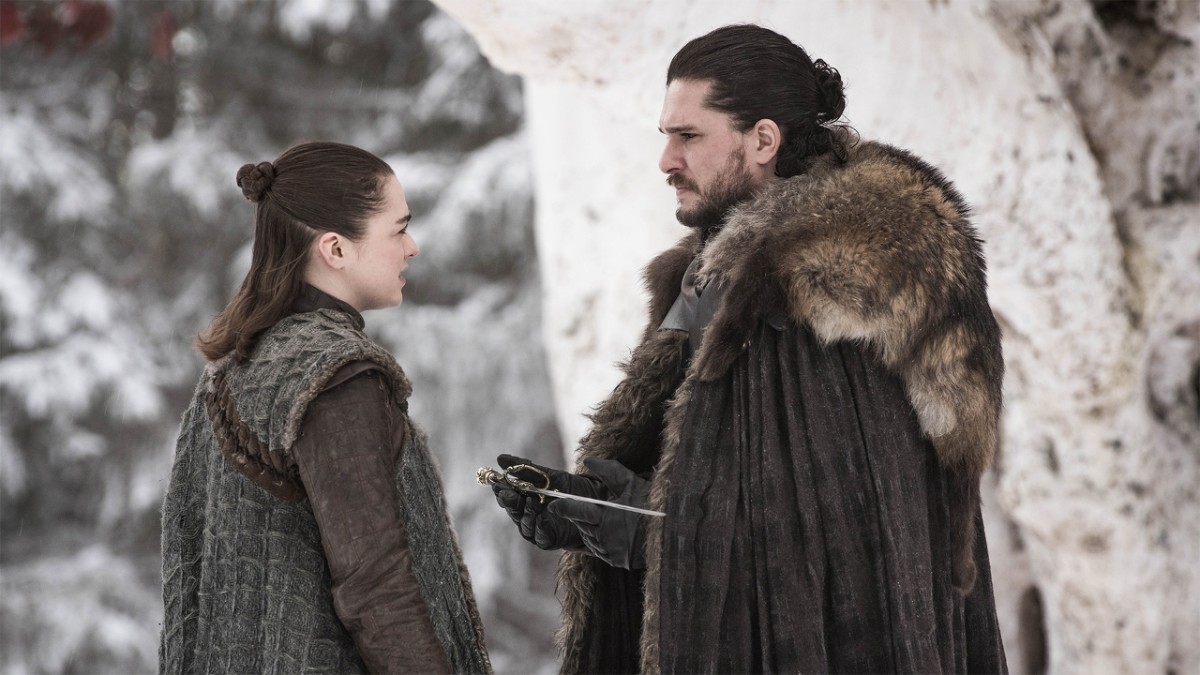 We’re two Game of Thrones episodes in, and the story has further advanced towards the event we’ve all been waiting for. I’m not going to spoil what just happened on HBO’s biggest show, or what’s about to go down next week, but I will discuss two things from last night’s episode, both concerning a certain girl. The following spoilers won’t ruin your Game of Thrones experience, although one of them deals directly with an older Game of Thrones fan theory.

How old is Arya?

Arya finally got some, so to speak, during the second episode, as she hooked up with Gendry in a slightly cringy scene. Unsurprisingly, the internet exploded, as fans were shocked to discover these two characters having sex, especially Arya.

But the internet should remember that Arya is about 18 years old in season 8. Gendry, meanwhile, is 23. In real life, Maise Williams is 22, while Joe Dempsie is 31. William talked to Entertainment Weekly about Arya’s scene with Gendry, revealing how she learned about that scene and what was required of her:

[Showrunners David Benioff and Dan Weiss] were like: ‘You can show as much or as little as you want.’ So I kept myself pretty private. I don’t think it’s important for Arya to flash. This beat isn’t really about that. And everybody else has already done it on the show, so…

If you’re still in shock, maybe you should remember that when Danaerys and Khal Drogo got together in season one, the character was 16 years old, actually three years older than in the book. And Drogo wasn’t exactly a tender lover initially. And let’s not forget that Sansa was quite young when she was married off.

Arya may have joined Game of Thrones when she was young, but she’s now a grown woman in real life, playing a teenage serial killer who’s experienced quite a lot for someone her age. She was bound to want to experience love and sex as well, and she’s doing it on her own accord, and on her own terms.

The audience should grow with Arya in that regard.

However, the most interesting detail coming out from this sex scene, aside from Gendry telling Arya who he is and teasing that he has a claim to the Iron Throne, is Arya’s marks.

The huge scars are proof to Gendry that she can fight and kill, and she’s ready to deal with life-threatening events and survive. To the audience, they’re a reminder of her past. The scars seem to be somewhat in line with Arya’s wounds from season 6, when the Waif attempted to kill her:

Arya somehow managed to save herself, survive those injuries, and ultimately kill the Waif:

That scene inspired a fan theory that said the Waif had actually taken Arya’s face after killing the young Stark girl. By having the Waif posing as a Stark, the Faceless Men would have a potentially useful weapon on their hands. That theory seems to have been debunked once and for all last night.

The scars might not match Arya’s wounds perfectly, and that could be true, because we never got to see her injuries in the first place. We do know the Waif attacked her from the right side, although Arya was wearing plenty of clothes at the time. It’s unclear, however, how much the Waif cut towards the right and under Arya’s rib cage. Here’s a reminder of Arya’s recovery process:

On the other hand, the fact that Arya got intimate with someone for the first time might also be an indication that nobody is wearing her face. I mean, would a face still stay on while you get that close to someone?