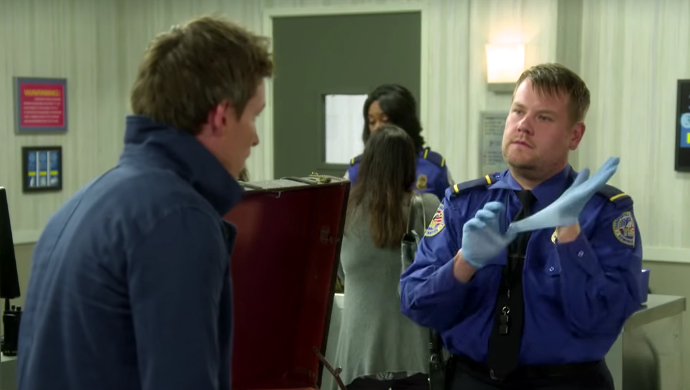 Fantastic Beasts and Where to Find Them is one of the most hotly anticipated movies of the year. It’s based on the same magical universe that we saw in Harry Potter, and it marks the triumphant return of J.K. Rowling’s work to the silver screen. The movie marks her screenplay debut, and the film is based on her book by the same name.

Fantastic Beasts tells the story of a young magician, Newt Scamander (Eddie Redmayne), who arrives by boat to New York in 1926 carrying a suitcase filled with magical creatures, some more dangerous than others. But what if Scamander were to travel to New York in this day and age? James Corden explored that possibility in a hilarious new sketch.

Scamander would likely travel by plane, which is the faster option. He’d still carry the same suitcase with monsters, but as a carry-on. Who’d blame him? After all, he needs to keep his eyes on his luggage at all times.

The problem with travel in the 21st century is that it’s subject to lots and lots of checks, including security checks that involve scanning the passenger’s belongings. That’s where TSA agent James Corden comes in. He’s a dedicated worker who’s not going to let anything slide. Just watch the video, and you’ll see what happens when Fantastic Beasts meet a thorough airport security check.

If you want to see the movie, you should know it premieres today so you had better go grab those tickets.