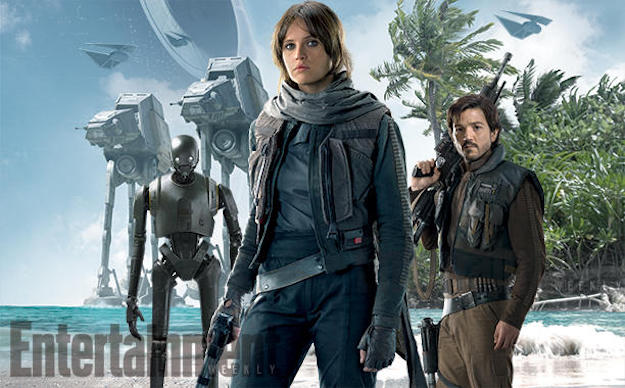 We were all but certain that Darth Vader would make an appearance in Rogue One: A Star Wars Story, but now, thanks to a new cover story from Entertainment Weekly, we finally have official confirmation from Lucasfilm.

Although the man formerly known as Anakin Skywalker will have a role to play in the upcoming spinoff, he won’t be the main antagonist. That honor is reserved for Ben Mendelsohn, who plays an “ambitious officer, who’s eager to earn the favor of the Emperor – and avoid the wrath of his black-masked enforcer.”

Along with unveiling the existence of Darth Vader, the cover also provides a fresh look at some of the new Imperial weaponry that will be on display in the film, including the AT-ACT walkers and TIE Strikers.

Darth Vader is certainly the most consequential reveal, but EW also managed to squeeze a few additional plot details out of Lucasfilm as well.

According to EW, Jyn Erso (played by Felicity Jones), is an outlaw who has enemies within the Rebellion and the Empire. By leading the mission to steal the plans for the Death Star, she has a chance to clear her name once and for all. All the while, her father (a scientist played by Mads Mikkelsen) is being recruited by both the Rebellion and the Empire for his knowledge.

The cover story is also said to include details about the characters within the film’s featured squad and revelations about the reshoots that caused a stir earlier this summer, so it might be worth keeping an eye out for this issue.