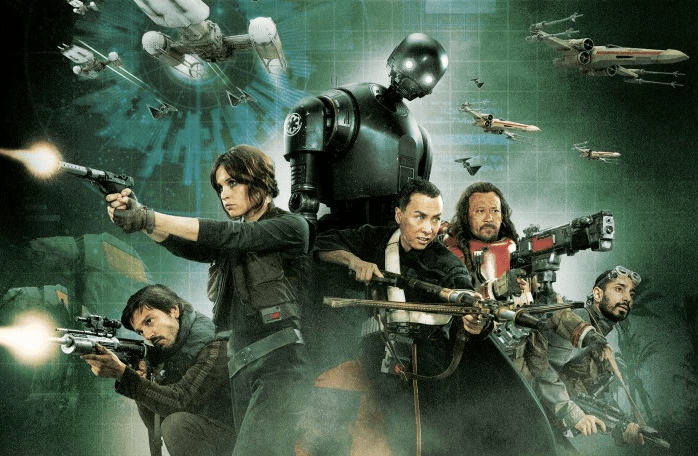 We’ve been desperate to know more about Rogue One: A Star Wars Story ever since the title was revealed last March, but other than releasing a trailer, has been frustratingly tight-lipped.

Thankfully, they can’t keep all the inevitable merchandise at bay forever, as evidenced by the fact that a preview for Rogue One: A Star Wars Story: The Official Visual Story Guide made its way online this week.

Described as “the official companion book to fall’s most anticipated release,” the story guide features character profiles for the heroes and villains, detailed descriptions of ships and droids and 130 full-color photos.

Originally discovered by German blog jedi-bibliothek.de, the images and information appeared in the Edelweiss catalog as part of MacMillan’s Winter 2016 preview. The images have since been pulled, but Slashfilm managed to capture and share a few of them before they were removed from the website.

First up, we have the heroes of the Rebel Alliance:

The descriptions are clearly placeholders (considering they’re all virtually identical), but the names and photos appear to be accurate portrayals of the characters that will appear in Rogue One. Interestingly, the aliens that round out the list of heroes don’t appear in the original image that Lucasfilm released last year.

Another preview image from the book reveals that the K-250 droid, played by Alan Tudyk, was once under the control of the Galactic Empire. It seems likely that we will learn how and why he joined the Rebel Alliance in Rogue One.

Up next, we have the villains of the Galactic Empire:

Director Krennic, played by Ben Mendelsohn, will serve as the primary antagonist of the film, flanked by the trusty stormtroopers and death troopers from the original trilogy. The rest of the text is placeholder, as it was for the heroes, but we know it will be Krennic’s job “to protect and preserve the evil Galactic Empire.”

Finally, the book gives us a look at some of Rogue One’s ships:

Not a whole lot to say about these other than that I can’t wait to see them in action when Rogue One: A Star Wars Story hits theaters on December 16th, 2016.