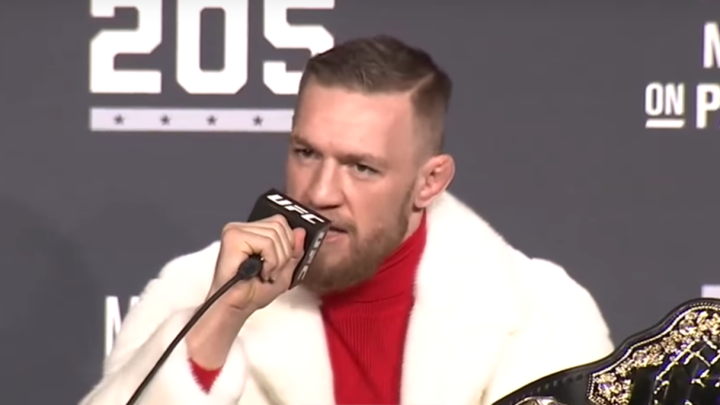 Conor McGregor and Floyd Mayweather have been casually beefing on social media and in interviews for some time, and fight fans have long wondered exactly what it would take for the two to meet in either a boxing ring or an MMA cage. We now know, at least on McGregor’s side of things: $100 million for a boxing match.

McGregor, a current UFC champion in two weight classes, declared Tuesday night that he’d be willing to fight Mayweather, who is considered to be the best pound-for-pound boxer in the world, in Mayweather’s own sport, but only for the hefty price tag of $100 million.

“Tell Floyd and Showtime, I’m coming. Tell him to go to them Showtime offices,” McGregor said in a video obtained by TMZ Sports. “I want $100 million cash to fight you under boxing rules cause he’s afraid of a real fight.”

Earlier this week, Mayweather responded to an interviewer’s question of whether he had seen McGregor’s recent championship-winning TKO of UFC lightweight Eddie Alvarez by comparing McGregor to an ant. In the same analogy, Mayweather declared himself to be an elephant, who doesn’t concern himself with such things.

Floyd Mayweather is sick of the Conor McGregor comparisons!
Check out the clip and don't miss the full thing on TMZ Sports tonight on @FS1! pic.twitter.com/Db4UXLlm25

McGregor has used Mayweather — who, by the way, is retired, and holds a 49-0 undefeated boxing record — as a measuring post in the past, and in the lead-up to UFC 205 went so far as to say that after he wins the Lightweight title he “might have to drag Floyd Mayweather out of bed” for his next challenge.

Obviously, the chances that McGregor and Mayweather will ever meet in any fighting venue are ridiculously slim. McGregor has no professional boxing bouts to his name, and Mayweather doesn’t dabble in MMA. Add to that the fact that Mayweather is retired, and McGregor already has two UFC belts to defend, and things get even more hazy. Still, ego is a funny thing, and when you sweeten the pot with hundreds of millions of dollars you never really know what’s going to happen.