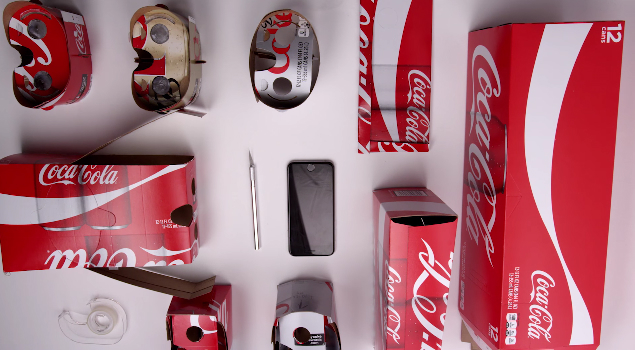 One of the central themes of this year’s Mobile World Congress is virtual reality. LG and Samsung kicked off the event with smartphone announcements that had plenty of tie-ins to VR. On top of that HTC brought the final version of its Vive model at the show while announcing pricing and launch dates for the headset. Alcatel, meanwhile, created a smartphone box for its new Idol 4 series that can be turned into a VR headset similar to Google’s Cardboard.

Coca-Cola isn’t a company that you’d expect to come up with a VR headset of its own, or to be present at the show. And it did none of these things. Coca-cola unveiled a VR trick of its own on YouTube a few days ago.

The company has designed its cardboard packaging in such a manner that you can easily turn it into a VR headset that can fit your smartphone, including the iPhone 6s, as you can see in the video below.

This is a marketing trick that takes advantage of the increased hype around virtual reality. While the VR headset would definitely work, don’t expect a stellar experience from it, at least not comparable with what dedicated VR kits from HTC and Facebook will have to offer. Not to mention that you need special apps on the phones to actually enjoy VR or 3D content.

That said, Coca-Cola’s trick is still interesting, so if you happen to track down such packaging in stores, you can start building your own virtual reality viewers in no time.