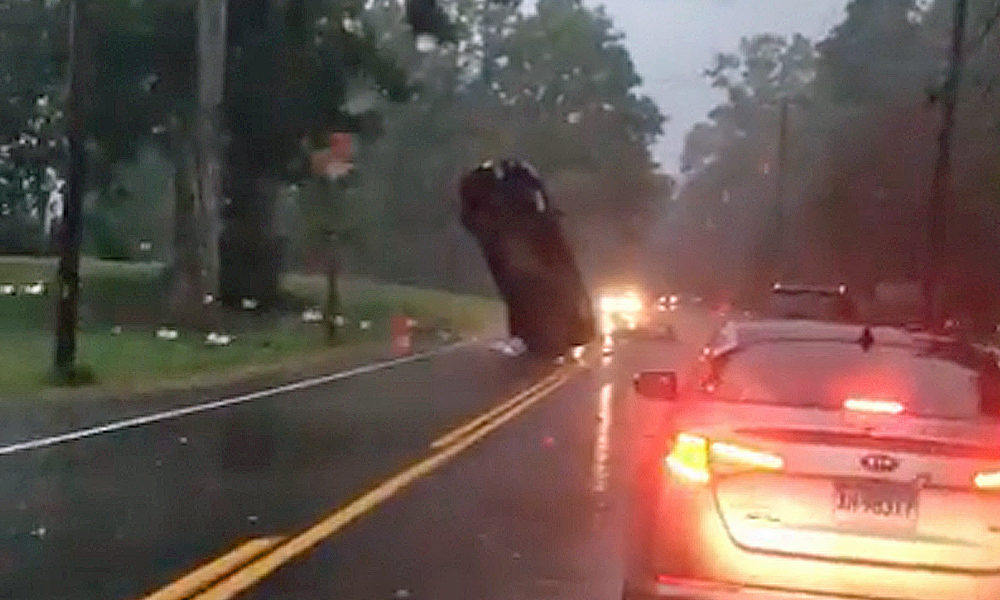 There’s really nothing funny about car crashes, at least most of the time. They can be devastating, tragic events, but we’re willing to call this particular one a very rare exception to that rule. We know almost nothing about the actual incident other than a 19-second video of the aftermath, but that extremely brief glimpse is still more than enough to fill us with many, many questions. For example: how on Earth did a full-sized passenger vehicle end up sitting perfectly straight on its rear end?

Upon dissecting the video, we only have a handful of key facts with which to paint a picture of the accident. Here are the things we know for sure, thanks to the narration of the woman wielding the camera:

Okay, so that’s not much to work with, but the video helps out a bit. From the first frame of the clip it seems like the car is simply balancing on its backside, defying gravity and looking quite fabulous in the process. However, once the camera zooms in a bit we can see something isn’t quite right.

There’s definitely an object stuck on the front bumper of the car, and it appears to be holding it up. It looks like it might be a power or telephone cable, and the silhouette of a thick wire against the light sky in the right of the frame seems to be pulled downward in the same direction.

If I had to guess, I’d say the front end of the vehicle veered far enough off the road to hit a wooden telephone pole, yanking the cable downwards. The car may have snapped the top of the pole off, which subsequently caught the front bumper of the car and, when the car’s momentum carried its nose upward, the cable was more than happy to provide a bit of stability for its new friend, keeping it upright.

Or maybe the wind took it.