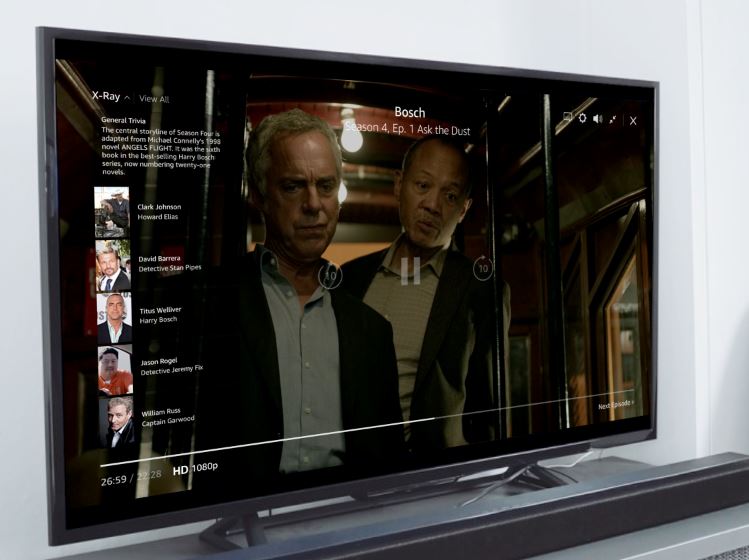 Unless you’re a super nerdy pop culture junkie who loves going down rabbit holes and consuming all the quirkiest, tiniest details of every movie and TV show you can find, most of the following probably will be news to you.

Did you know, for example, that in Deadpool 2 after Deadpool gets his legs torn off by Juggernaut and he hangs out with Blind Al waiting for them to grow back, he’s wearing the same shirt that Chunk wears in The Goonies? Josh Brolin, of course, was one of the stars in it — and he didn’t notice the shirt, according to Ryan Reynolds. Or how about this — did you know that, in the Star Wars franchise, the word Wookiee was inspired by Bill Wookey, a friend of actor Terry McGovern? Terry played a robot cop in George Lucas’ THX 1138, improvising the line “I think I ran over a Wookiee back there.”

These are some of the fun, random and interesting details that Amazon’s X-Ray feature generates while you stream TV shows and movies via Amazon’s Prime Video service.

For the longest time, I didn’t pay attention to the results that X-Ray was populating in the top left corner as I watched Amazon content on my mobile devices. But, admittedly, it does give you some pretty fascinating details that could help you go even deeper into the shows and movies you love, if you want. It provides everything from the names of actors and their film credits as they appear on screen, as well as the title of music that’s playing and trivia about a particular scene.

That Wookiee detail above, for instance, pops up at one point during Solo: A Star Wars Story. At one point while watching Avengers: Infinity War, X-Ray points out that the movie contains remnants from Stan Lee’s past cameos. Tony Stark uses the flip phone that Stan delivered to him in Captain America: Civil War, we’re told, and Thor still sports the haircut that Stan gave him in Thor: Ragnarok

Among X-Ray’s other benefits is occasional exclusive bonus video content found only through X-Ray, which many people may not even be aware of as an X-Ray feature at all. Of course, you can also use X-Ray while reading books on a Kindle-supported device. Which is especially useful when reading something like George R.R. Martin’s Game of Thrones books, packed as they are with hundreds of characters that some readers may find it difficult to keep track of on their own.

For my money, though, watching video content with this helpful feature is particularly interesting. And it’s not all fun, light-hearted insights it brings you, either.

At one point during the Amazon documentary Lorena executive produced by Jordan Peele, X-Ray notes that the presence of a gun in the house of a domestic violence situation increases the chances of homicide by 500%. During one of the episodes from the first season of Amazon’s Jack Ryan series, we’re told why Hanin’s planned escape to Europe from the shores of Turkey is a dangerous one. Per X-Ray, according to a 2017 report by the United Nations Refugee Agency, one in every 185 people who crossed the sea between Turkey and Greece from January through April 2017 died either by drowning or from hypothermia.

It’s certainly an informative, useful tool for learning a little bit more about the world — both the fictional world of pop culture and the expansive real-life world around you, too.