Stop us if you’ve heard this one before, but cable TV is continuing to bleed subscribers in record numbers as they flock to cheaper Internet-based options — cutting the cord, in other words, in favor of options like Netflix, Hulu and the like. Indeed, a new survey of a little more than 5,000 Americans by Chicago-based Waterstone Management Group found that consumers are increasingly being lured by the content available between choices like Netflix, Hulu and — and the simplicity of the subscriptions, as opposed to the fees and contracts that come with cable packages — to finally cut cable out of their lives entirely.

Almost 60 percent of Americans, according to this new survey, have canceled their cable TV packages, with only 12 percent affirming they’re fine with continuing to pay traditional cable companies for TV. In another sign of how dire things have become for those cable companies, though, another 29 percent of Americans responded to this survey by saying they’re close to canceling their cable subscription and going all-in on streaming.

“As industry analysts forecast another merciless year of cord cutting — the act of canceling cable TV in favor of streaming services and web content — our recent survey of 5000 Americans indicates that cord cutting is well underway,” the survey report notes with a bit of understatement, with the full results available here.

This map included with the results paints a picture of where cord-cutting is most prevalent around the country. The darker the color here, the greater the percentage of consumers who’ve ditched cable: 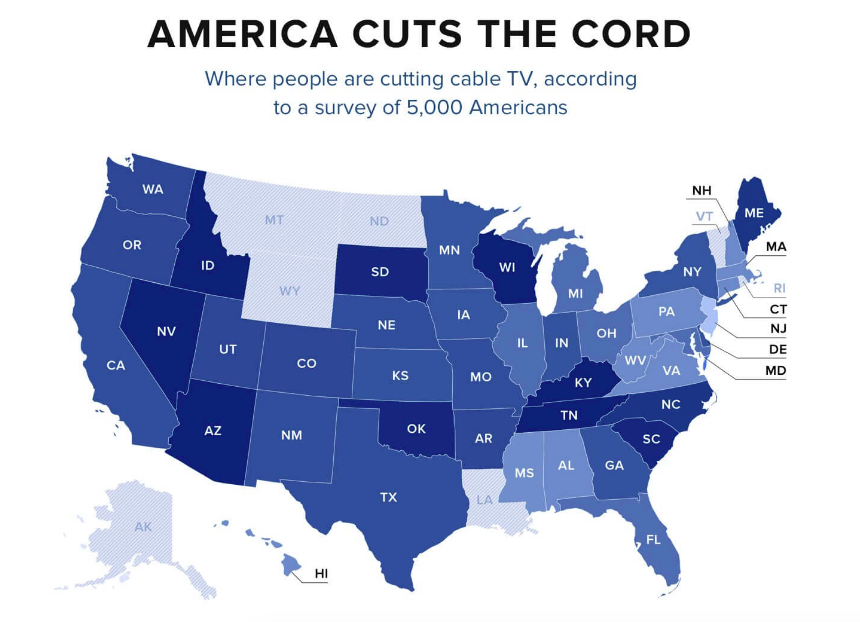 Driving this trend, of course, is the billions of dollars’ worth of content available just via Netflix, Amazon and Hulu alone. Netflix, the survey notes, spent $13 billion on content in 2018, while Amazon shelled out $5 billion and Hulu gives its subscribers access to $30 billion worth of original and licensed content.

This helps explain Netflix’s recent announcement that the streaming giant is hiking its monthly subscription fees by a dollar or two a month, as well as Netflix’s pending move to crack down on the illegal sharing of accounts. The company plans to rely on machine learning to look at account behavior and see who’s mooching, which if it works could generate some substantial new revenue for the company.

How much? Well, a report from Parks Associations found that over the next two years, “credential sharing” will be responsible for an almost $10 billion loss of revenue for pay TV and a little more than $1 billion in lost over-the-top revenue. So as cord-cutting accelerates, streaming players will certainly want to make sure they’re getting every dollar they can.