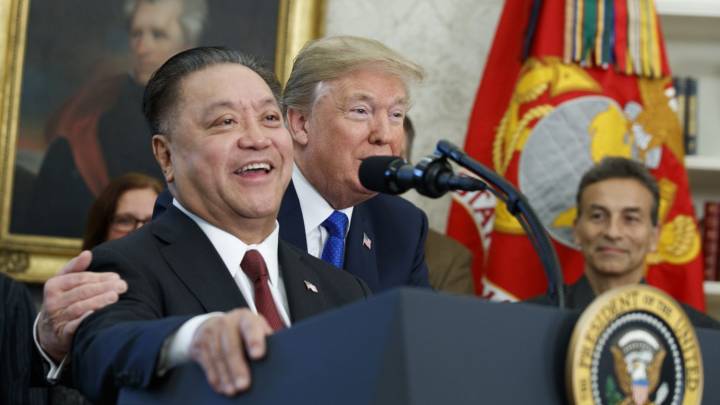 President Trump issued an executive order late Monday that blocks Broadcom, a Singapore-based semiconductor firm, from taking over San Diego-based Qualcomm. The deal had already been under scrutiny from US regulators and lawmakers, who saw the foreign acquisition of Qualcomm as a national security threat.

According to Bloomberg, Trump acted on a recommendation from the Committee on Foreign Investment in the United States (CFIUS), which reviews foreign acquisitions of American firms. Broadcom is in the process of inverting its headquarters to the United States to get around CFIUS scrutiny.

The Executive Order outlines that Broadcom, “through exercising control of Qualcomm Incorporated (Qualcomm), a Delaware corporation, might take action that threatens to impair the national security of the United States.” The order further bars Broadcom’s nominees for standing for election on Qualcomm’s board of directors, the route that Broadcom was pursuing after the board of directors previously voted against Qualcomm accepting Broadcom’s deal.

Bloomberg reports that Broadcom CEO Hock Tan met with officials at the Pentagon earlier Monday to try and persuade them not to kill the deal. Clearly, those efforts were unsuccessful.

It’s difficult to see a path to this deal taking place following Trump’s actions with the executive order. A challenge could be made to the national security grounds once Broadcom successfully makes itself an American company on paper. At that point, however, an acquisition would be subject to Department of Justice anti-trust oversight, and it’s clear that the executive branch of the government is not in favor of the deal.

Broadcom and Qualcomm have not yet issued statements addressing the executive order. In its previous response to the CFIUS injuction, the company said “Broadcom has a successful 50-year heritage of building leading communications technologies including Wi-Fi, broadband access, network switching and routing.  With its proven track record of investing in and growing core franchises, Broadcom is committed to making the U.S. the global leader in 5G.”

“I recently made this public pledge:  Broadcom is committed to making the United States the global leader in 5G,” Broadcom CEO Hock Tan said in a letter last week to Congressional leaders. “Any notion that a combined Broadcom-Qualcomm would slash funding or cede leadership in 5G is completely unfounded.  We have a proven track record of investing in and growing core franchises in the companies we acquire. In the case of Qualcomm, this will be 5G cellular.”