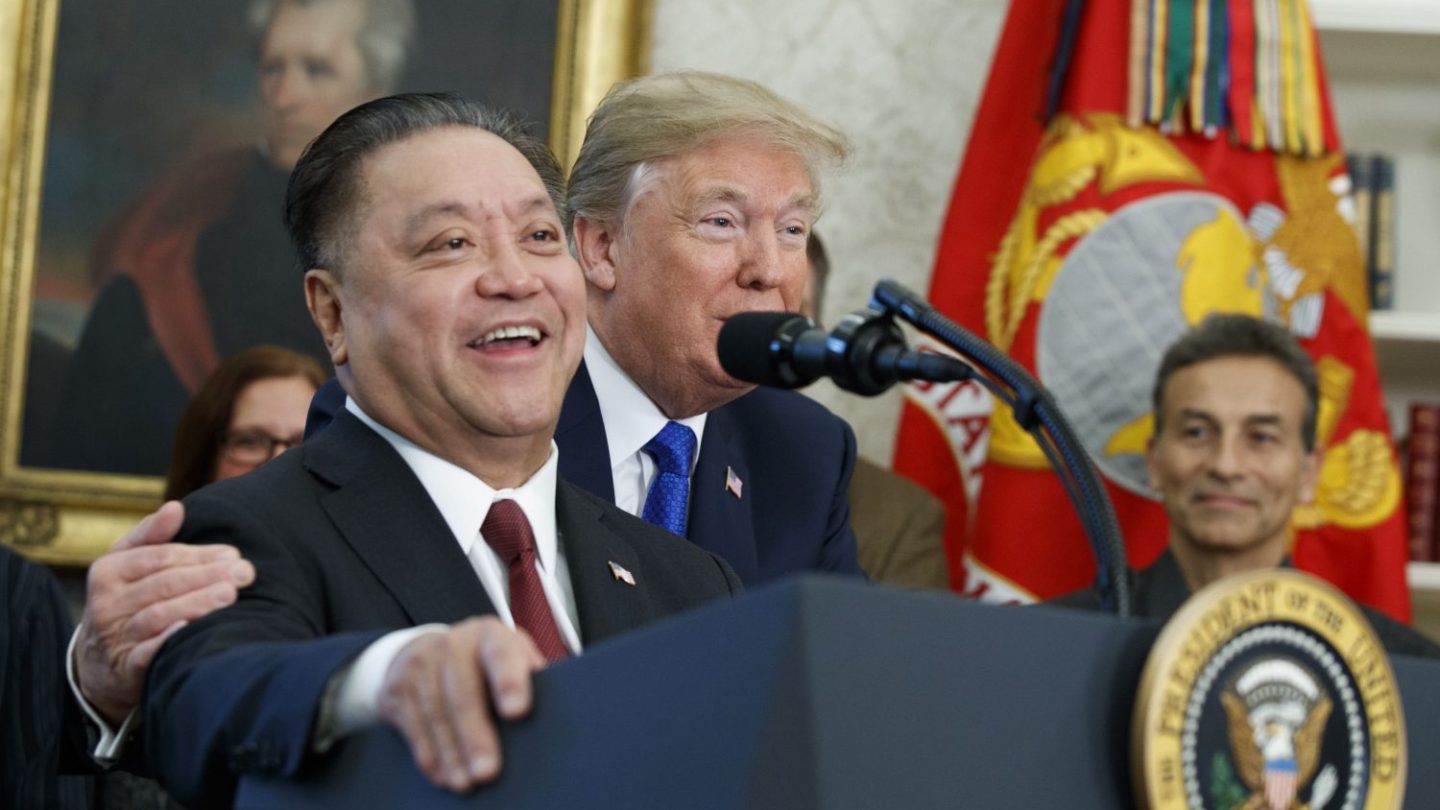 Broadcom, the Singapore-based semiconductor firm that is currently in the process of trying to acquire Qualcomm, has come under fire this week from the US government, which doesn’t seem inclined to let the deal happen. The Committee on Foreign Investment in the United States announced early this week that it is investigating the deal, a move backed by Congressional lawmakers.

To try and appease the government, Broadcom sent a letter to Congress Friday morning that reaffirmed its promise to make the US a leader in the global 5G industry. To address the CFIUS’s national security concerns, Broadcom also promised not to sell off any “critical national security assets” to foreign firms.

“I recently made this public pledge:  Broadcom is committed to making the United States the global leader in 5G,” Broadcom CEO Hock Tan said in the letter. “Any notion that a combined Broadcom-Qualcomm would slash funding or cede leadership in 5G is completely unfounded.  We have a proven track record of investing in and growing core franchises in the companies we acquire. In the case of Qualcomm, this will be 5G cellular.”

The company also promises to “work closely with the United States government as we drive to achieve and sustain this global leadership in 5G and beyond,” and Tan re-upped a promise made earlier this week to create a $1.5 billion R&D fund to drive investment in the United States.

To address the CFIUS’s concerns that a Broadcom takeover of Qualcomm would pose a national security risk, Tan also promised that the company wouldn’t sell off any of its critical assets. “In addition, Broadcom will not sell any critical national security assets to any foreign companies,” Tan wrote. “Of course, any dispositions of assets to foreign buyers would be themselves subject to CFIUS review.”

In its initial statement, the CFIUS said that it thinks a takeover could threaten US national security:

During the time between Qualcomm’s unilateral filing and Treasury’s agency filing, Cfius has been communicating with both parties to obtain additional information to inform its decision on the appropriate path forward in regards to this matter. It was during this time, and as a result of these communications and additional information, that Cfius has come to believe that Broadcom’s successful hostile takeover attempt of Qualcomm, including the related stock purchase, proxy contest for the election of six directors to Qualcomm’s Board as proposed and selected by Broadcom, Proposed Agreement and Plan of Merger, and any potential merger between Broadcom and Qualcomm, could pose a risk to the national security of the United States.

The letter goes on to say:

The CFIUS letter caused Qualcomm to delay its shareholder meeting by 30 days. Since Qualcomm’s board has rejected Broadcom’s bids for the company thus far, Broadcom’s hopes are riding on a direct appeal to Qualcomm shareholders, who would have to vote in favor of Broadcom’s offer to acquire the company.

U.S. Republican lawmakers on Monday welcomed the CFIUS investigation and the delay of the vote. “Qualcomm’s work is too important to our national security to let it fall into the hands of a foreign company — and in a hostile takeover no less,” Senator Tom Cotton, a leading Republican lawmaker on foreign policy, said.

Broadcom’s full letter to Congress is below.

We appreciate your interest in our offer to acquire Qualcomm Incorporated and would like to take this opportunity to respectfully address a number of issues with regard to this transaction and its potential impact.

Much of the recent communication about our acquisition has centered on concerns about the future development of 5G technology. To make it clear that we are steadfast in our support of 5G development, I recently made this public pledge:  Broadcom is committed to making the United States the global leader in 5G. Any notion that a combined Broadcom-Qualcomm would slash funding or cede leadership in 5G is completely unfounded. We have a proven track record of investing in and growing core franchises in the companies we acquire. In the case of Qualcomm, this will be 5G cellular. We are fully committed to making the United Statesthe global leader in 5G by focusing resources and strengthening leadership in this area.  We also will work closely with the United States government as we drive to achieve and sustain this global leadership in 5G and beyond.

Consistent with that commitment, Broadcom is also pledging to create a new $1.5 billion fund with a focus on innovation to train and educate the next generation of RF engineers in the United States. This will ensure America’s continued leadership in future wireless technology.

In addition, Broadcom will not sell any critical national security assets to any foreign companies. Of course, any dispositions of assets to foreign buyers would be themselves subject to CFIUS review.

The reality is that right now, Qualcomm faces a number of challenges that hamper its role in developing 5G. One is that it has been funding its R&D with licensing revenue derived from predatory and anticompetitive practices that have put it at odds with customers and antitrust regulators around the world. There is no truth to Qualcomm’s argument that its anticompetitive licensing practices are needed to fund a robust R&D effort. None of the industry’s other great innovators violate the law in order to finance their R&D. In recent years, Qualcomm also has seen significant revenue declines during a period of strong industry growth and has underperformed its peers in revenue, gross profit and net income.

In sharp contrast, Broadcom funds our R&D through lawful practices, and has a rich and ongoing legacy of innovation, which drives its leading core franchises and delivers shareholder returns that are eight times those of Qualcomm over the past five years.

Second, I want to make it clear that Broadcom is today in every important respect an American company. We are built on the roots of several innovative and leading United States technology companies including Hewlett-Packard, AT&T, Broadcom Corporation and Brocade Communications Systems. Broadcom is led by an executive team of American citizens and a Board of Directors made up of nearly all American citizens. Ninety percent of Broadcom’s shareholders are in the United States; in fact, we are largely owned by the same United Statesinstitutional investors that own Qualcomm. More than half of Broadcom’s total workforce is in the United States, across more than 25 states, including Texas, Colorado, California and Pennsylvania. When we complete our acquisition of Qualcomm, we expect to have more than 25,000 employees in the United States, working to make Broadcom the leading communication semiconductor company in the world.

The company is currently managed from its headquarters in San Jose, California.  Today, we are in the final stages of redomiciling to the United States, and expect this process will be completed no later than May 6, 2018. From our base here, each year we will invest $3 billion in research and engineering and $6 billion in manufacturing, resulting in more high-paying tech jobs in the United States. Due to this move, we will also pay hundreds of millions of dollars in additional taxes to the United States. This is the right move because Broadcom is an American company in all respects but its legal domicile.

The bottom line is that a combined, American Broadcom-Qualcomm will be a more focused and stronger champion for sustained United States leadership in 5G than a standalone Qualcomm, an outcome that strongly supports America’s national security interests.

If you have any questions or would like to discuss this important matter further, please let me know. We want to be as cooperative as possible in this process.