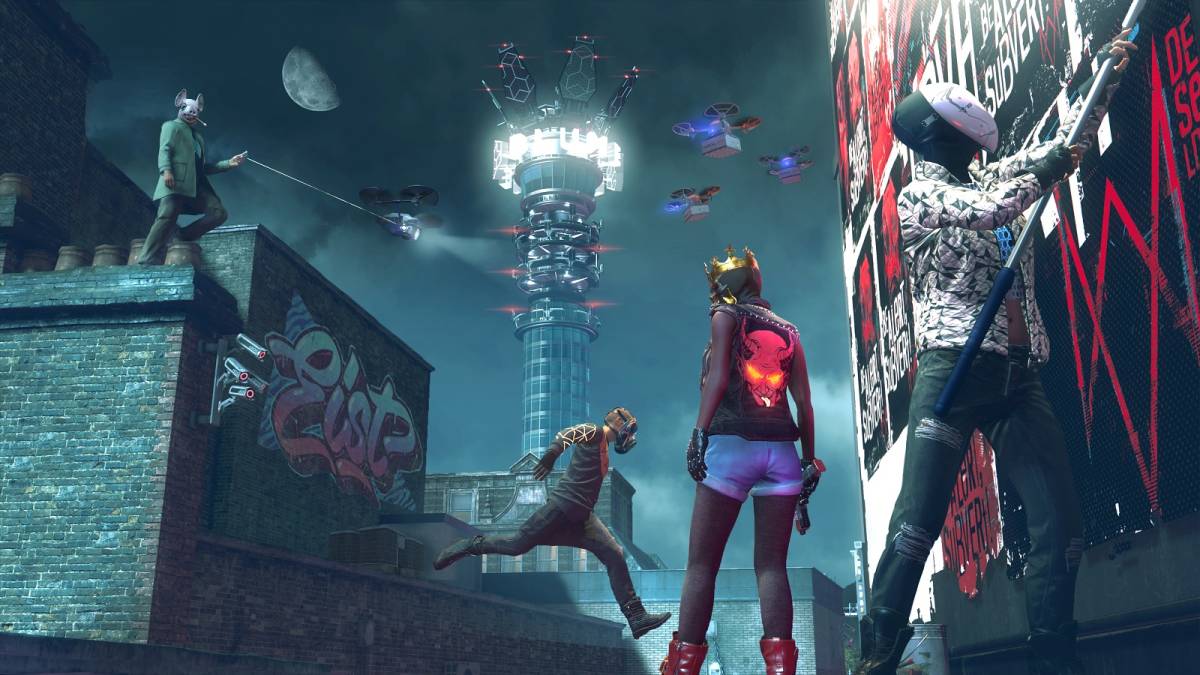 The hook of Watch Dogs: Legion is undeniably appealing: Be anyone. Rather than playing as a single protagonist destined to save the world, your job in the third Watch Dogs game is to roam the streets of London and recruit as many NPCs as you deem necessary to create a resistance army capable of fighting back against the oppressive forces that control the city.

On paper, this might sound like the makings of a compelling game, both narratively and structurally. But the problem, as they say, is that the game isn’t played on paper, and the area where this game consistently lacks is in the execution of its many, many ideas.

You will spend a vast majority of your time in the near-future London of Watch Dogs: Legion doing one of two things: Scouting an area for a mission by hacking cameras and drones to get a bead on the baddies before you waltz in, or driving to a new location where you will be asked to do the same thing. The variety of ways in which you can tackle these missions is admirable. Some characters are better suited for barging in, shooting first, and asking questions never, while others do their best work hanging back and hacking their way through a facility without ever actually stepping foot inside.

I can appreciate a game that rewards my patience and my ability to map out and execute a plan, but within a few hours of playing, these missions began to feel rote. The goal is almost always to reach a box somewhere deep within a building, pull the data from that box, and then escape without dying. It’s frequently possible to accomplish this by using a Spiderbot, which can crawl through vents, hack terminals, and maneuver more easily without being spotted, but the result is the same.

The repetitive nature of these objectives might not stand out quite as much if the moment-to-moment gameplay was more enjoyable. Moving around the world can occasionally be thrilling, especially when you hop on to a cargo drone, hack it, and fly off into the sunset as enemies hopelessly fire into the sky, but running down corridors and ducking behind cover has been done better than this. And as dynamic as the game wants to be — and can be, with the right tools — gunplay is not a strength of Watch Dogs. The times that I’ve died while trying to take on a dozen enemies streaming in from every direction have felt more cheap than anything, and I wish there were more ways to navigate those scenarios, especially early in the game.

Of course, the more you play, the more you progress, and the more you progress, the more interesting those encounters become. As you explore the world and complete missions, you will collect Tech Points that can be used to unlock gadgets and upgrades for your characters. These boosts apply to everyone, so your entire team grows stronger as you progress. For example, after getting ripped apart by automated turrets in one mission, I bought an upgrade that allowed me to hijack turrets before I tried again with a new character. Suddenly, rather than struggling to make my way through the area, I was shredding everyone in my path.

There are a number of threads that you will follow throughout the campaign of Legion, but the gist of the story is that there are a number of forces exerting their will over London following a massive terrorist attack, and your ragtag team of DedSec operatives has to stop them. Legion uses this conflict to comment on a number of hot-button issues affecting all of us in the real world, from dangerous hackers terrorizing innocent people to the sudden rise of a police state to a tech CEO that will stop at nothing to see her version of the world made real.

Some of these are more thought-provoking and deftly observed than others, especially at the fringes, like when you catch a radio show discussing the ramifications of the private military corporation Albion being given free rein to police London how it sees fit. But the kitchen sink approach also works to the game’s detriment when it attempts to tackle all of the world’s most pressing concerns at once while you drive around in a sports car running over civilians.

One of the ways that Ubisoft has attempted to solve for that dissonance between the gameplay and the story is by giving DedSec the opportunity to complete specific tasks in each of London’s boroughs to inspire the populace to rise up against Albion. As they become more defiant, the police presence in those boroughs will decrease. These are fun diversions that have a noticeable impact on the virtual world, although the objectives themselves aren’t especially varied or interesting.

I haven’t spent much time in this review talking about the fact that you can recruit literally any NPC off the street to join your team and then switch between them at will. The reason for this is that, as I said at the beginning of this review, the execution is lacking. Yes, every character has a name and a background, but they all basically do the same things: Run, shoot, drive, and hack. By far the most interesting part of the game’s “Play As Anyone” system is the fact that they interact and speak with one another during missions, which is an incredibly effective tool to show that there is no main character, but rather a main team, and one of your own making.

The bar for open world games has been raised repeatedly in recent years, from the fluid traversal of Marvel’s Spider-Man to the stunning architecture and scope of Assassin’s Creed Odyssey to the unimaginable attention to detail of Red Dead Redemption 2. It might not be fair, but it’s impossible not to compare Watch Dogs: Legion to its peers, and while it features a sandbox worth exploring and innovates on the formula established by the previous two entries in the series, it doesn’t break much new ground in the genre outside of its main hook. That said, it’s a competent shooter, riding a cargo drone over London never gets old, and I desperately want a Spiderbot of my own.