Google loves a good Easter egg, and with the holiday season in full swing, the search giant resurrected a fun little surprise that you may remember from previous years. If you open up a new tab in your web browser of choice — it doesn’t have to be Chrome — and type in ‘Festivus’ into Google, you’ll see an aluminum pole positioned on the left-hand side of your browser.

Yep, it’s a Festivus pole, an homage to the famous — and dare I say, overrated — Seinfeld episode where we learn that Festivus is a holiday invented by Frank Costanza, George’s dad. The holiday, if you need a refresher on the episode, is celebrated with a “feats of strength” competition, an “airing of grievances”, and lastly, an aluminum pole which George’s father claims was chosen for its “very high strength to weight ratio.”

Kramer, naturally, becomes quite intrigued with the concept.

Here’s how we first learn about the pole.

Kramer: Is there a tree?

Frank Costanza: No. Instead, there’s a pole. It requires no decoration. I find tinsel distracting.

Frank Costanza later adds that the pole is made from aluminum.

In any event, here’s what the Google homepage looks like if you do a search for Festivus. 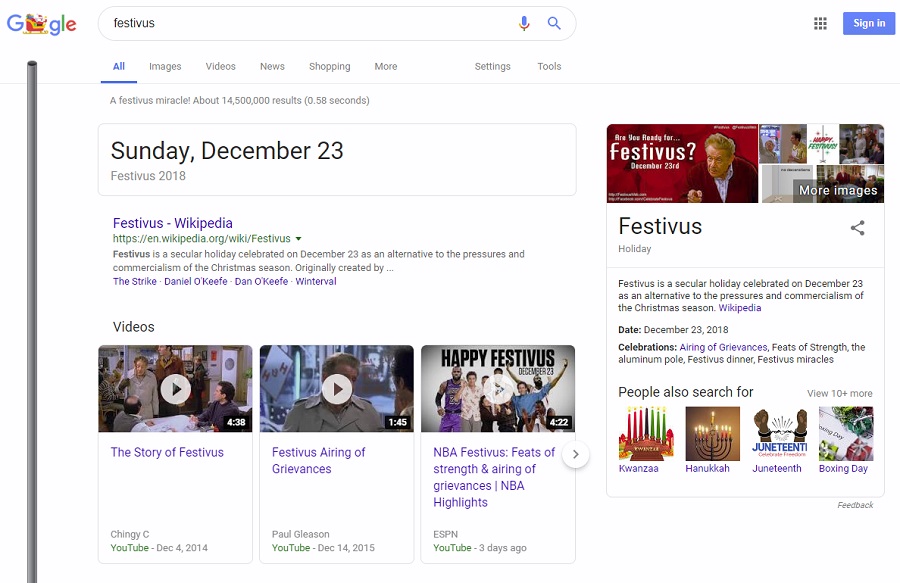 Not surprisingly, super fans of the show can purchase an actual Festivus pole online if they really want to get into the non-holiday holiday spirit.

And last but not least, here’s a fun clip from the Festivus-themed Seinfeld episode “The Strike.”