Earlier today, Apple CEO Tim Cook tweeted out a picture of him hanging with his best buds at an Apple supplier’s factory in Cincinnati. Prominently visible in his pocket is the outline of some kind of phone, which internet sleuths quickly started guessing is the iPhone 8.

Well, guess no more. Thanks to the magic of Photoshop and a misspent youth watching CSI, I’ve worked out the dimensions of whatever that thing in Cook’s pocket is, and it certainly could be the iPhone 8.

Thanks to the team at CTS in Cincinnati, manufacturers of best-in-class testing equipment for Apple. Enjoyed my visit this morning! pic.twitter.com/lFLW5caYxw

Using several other publicly available pictures of Cook wearing the same glasses and his known height of 6″3′, we’ve measured and worked out the size of the object in his pocket. The dimensions we came up with are 156 x 74mm, just a little shorter and less wide than the iPhone 7 Plus.

Those numbers line up with previous rumors and mockups we’ve seen of the iPhone 8. The phone is set to have an all-screen design with virtually no bezel at the top, and no bar for a home button at the bottom. That will allow Apple to fit a giant screen (5.7 inches or therabouts) in a phone that’s a tiny bit smaller than the iPhone 7 Plus. 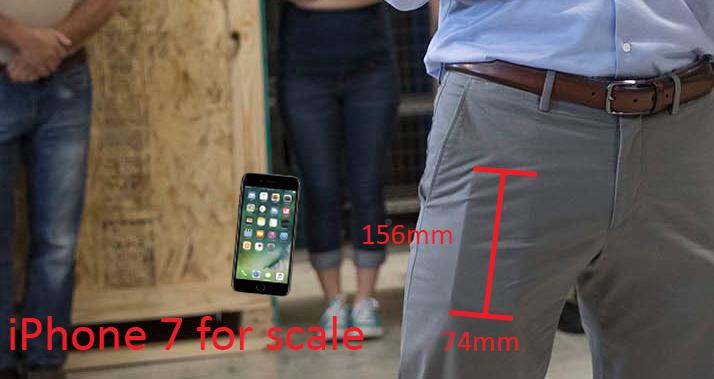 Now, given that the phone is in a pocket and it’s based off approximate extrapolated measurements, so it’s not perfect. There’s also a few millimeters of inaccuracy in each direction thanks to the fabric.

There’s also the very good chance that this is just an elaborate tease or troll by Cook. Apple famously hires former spies to do counterintelligence and control information about upcoming products, and there’s a reason that very little leaks about its upcoming devices. It could well be an iPhone 7 in a case, or just a block of aluminum that Cook put in there to mess with us.

Apart from the dimensions lining up with previous iPhone 8 rumors, there’s nothing to specifically suggest that’s an iPhone 8 in his pocket. But whatever it is, we’ve measured it carefully.

Tweet
This is the 20TB hard drive your computer deserves