Apple’s new AirPods are by far the most talked about headphones that have been released in recent years. Following their unveiling last September, there was a bit of controversy surrounding Apple’s peculiar AirPods design. There were also some manufacturing issues that ended up delaying Apple’s launch from October all the way until December last year. But Apple’s truly wireless earbuds are still next to impossible to find unless you’re willing to pay a premium and buy them on Amazon, and people who have managed to secure a pair love them. In fact, even I love them after having been quite critical of Apple’s design following the AirPods’ unveiling.

First things first: what is firmware? Without getting too involved, firmware is the software installed on device’s read-only memory that controls how the device functions. While Apple hasn’t released any sort of change log alongside its new AirPods firmware, firmware updates generally help devices perform certain functions more efficiently, so it’s always a good idea to install them.

First, let’s check to see what firmware version is on your AirPods now. With the AirPods connected to your iPhone or iPad via Bluetooth, open the Settings app and go to General > About. Now scroll to the bottom of that list and tap on AirPods. If you don’t see AirPods listed there, don’t panic. Simply turn Bluetooth off and back on again, and you should see it now. 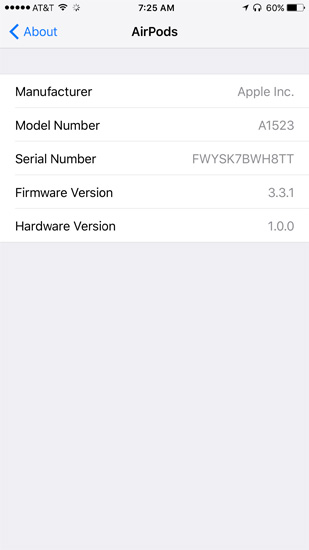 The resulting screen will show you the current firmware version on your AirPods. They ship with version 3.3.1 installed, as seen above, and Apple’s new update is version 3.5.1. If you already see 3.5.1 listed as the firmware version, you’re all set. If not, installation is simple — here are all the steps you’ll need to take:

Yup, that’s it. One step. Once your AirPods are plugged in, they will automatically install the firmware update over the next 10 minutes or so. Leave them alone for a while, and the next time you connect you’ll see the updated firmware installed on your AirPods.

Tweet
Netflix originals crush everything from Amazon and Hulu