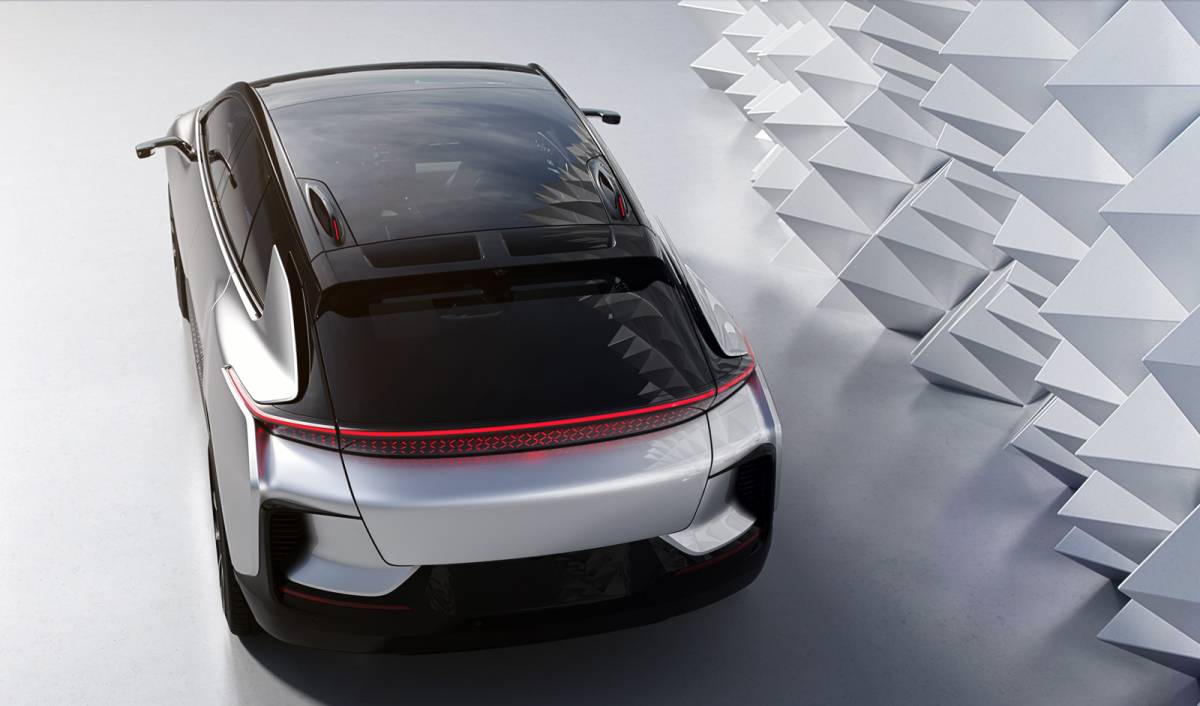 To say Faraday Future has gotten off to a rocky start over the past couple of years may be the understatement of the year, and it’s only January. The company debuted its FFZERO1 concept supercar amid a whirlwind of buzz at CES 2016, but the press quickly dismissed the car as vapor. A year full of turmoil with Faraday’s main financier, lawsuits filed by vendors alleging millions in unpaid bills, and numerous top-level executive departures cast further doubt on the company’s future. But on Tuesday night, Faraday Future unveiled its first actual production car, which it says will enter production sometime next year.

Ahead of CES 2017, I spent a full day touring Faraday’s Gardena, California headquarters. I saw where the car is being designed and developed, I checked out prototypes of the futuristic electric car, and I even had my head pinned back when I went for a ride in an early prototype. I already shared my overall impressions and some initial thoughts about the FF 91 last night, and now I’ll focus on a few key areas where Faraday Future is truly innovating.

Innovation begins to appear at the very core of the FF 91, where Faraday Future’s Variable Platform Architecture (VPA) redefines the way a car is built. Consisting of a modular wheelbase, modular battery infrastructure, and modular motor configurations, VPA technology essentially provides bones and guts that can be manipulated quickly to as new vehicles are designed. Tech like this will drastically reduce time to market for new vehicles.

Here’s a video that shows a bit more about how VPA works:

Keyless entry and keyless go technology started on premium cars, and the tech has now trickled down to all automobile ranges. At best, this means carrying a key in your pocket or purse, but never having to actually use it thanks to special contact points on the door handles that lock and unlock the doors, and to push-button ignitions. But what if you didn’t need any key at all?

Exterior and interior cameras on the FF 91 recognize drivers and passengers as they approach the vehicle, and Bluetooth connects to iPhones and Android phones. Motorized suicide doors then open and close with the touch of a button, and the electric motors fire up with the push of another button.

But the best part about Faraday’s system is that it’s tied to a profile. This means that whether you’re stepping into the cockpit of your own FF 91 or you’re sliding into the back of someone else’s FF 91, all of your settings and preferences will automatically be adjusted by the vehicle.

Faraday Future does not yet have a finished FF 91. While the company’s claim that the vehicle will accelerate from 0 to 60 mph in 2.39 seconds, there is currently no way to confirm that with a production-weight car. But having seen the company’s work in its current state, and having ridden in a prototype and had my head pinned back by its acceleration, I can safely say that Faraday is well on its way to producing one of the most powerful and agile production cars I have ever seen.

Three electric motors combine to produce 1,050 hp, and the heavy battery packs give the FF 91 a very low center of gravity. Even the early model I rode in hugged the road impressively as the driver jerked the wheel from side to side. The rear wheels also have a few degrees of left and right movement, dramatically reducing the FF 91’s turning radius despite its long 126-inch wheelbase.

Aerodynamics also play a huge role in performance and efficiency, of course. Angus Lock, Faraday’s head of aero, joined the company from Tesla, where he worked on the aerodynamics of the Roadster and the Model S.

Exterior vehicle lighting has changed a great deal over the past two decades thanks to a trend started by BMW’s “angel eyes.” Now, just about every car on the road has some crazy-looking DRL setup. The FF 91 takes exterior lighting to an entirely new place, with “FF” pattern LED lighting on all sides of the car.

What’s most interesting about Faraday’s solution though, is that it actually serves a purpose beyond looking cool. Just as brake lights communicate a message to drivers behind a car, the FF 91’s lighting glows and pulses to communicate messages to people around the vehicle. For example, the lights on the front and along the sides of the car will pulse white when the vehicle is driving itself in autonomous mode.

Speaking of autonomous mode, the FF 91 will be fully equipped to embrace the future of self-driving vehicles when we finally arrive at a point where regulation is in place and systems are smart enough to drive without human assistance. In the meantime, Faraday Future’s cars will already have some very nifty self-driving modes that owners will undoubtedly appreciate. Among them, valet mode is by far my favorite.

With valet mode enabled, and in a lot that Faraday’s system has mapped, an FF 91 driver can step out of his car at the front door of a building. The car will then slowly make its way around the parking lot on its own, scanning for open spots and reading signage as well as painted markers in order to avoid parking in restricted spaces. When it finds an open spot, it will park itself and power down.

Of course, when the visit is through the driver can recall the FF 91 using his or her smartphone, and it will be waiting at the front door as he or she exits the building.

Faraday Future has been cautious in showing off the FF 91’s interior since it’s not yet finalized, but what I’ve seen so far is impressive. Dozens of screens of all shapes and sizes replace traditional instrument panels and controls. We’re not talking about a single great big touchscreen on the console like you’ve seen in Teslas — there are literally screens everywhere. Screens in the front, screens in the back, screens in the door panels, screens in the pillars. There’s even a giant screen that folds down from the roof to entertain rear passengers.

Faraday has more announcements planned in the coming months, and the interior of the car is one area where you should definitely keep an eye peeled.

Innovation continues on the exterior of the car, where sleek aerodynamics are only the beginning.

The FF 91 is the first car ever to feature a fully retractable 3D lidar solution found on the hood near the windshield. The car also features 10 high-definition cameras, 13 long- and short-range radar sensors, and 12 ultrasonic sensors. All of this tech combines to form one of the most sophisticated and self-aware vehicles that has ever been built.

Other exterior innovations include the lighting, of course, as well as dual roof-mounted antennas that also broadcast Wi-Fi to connect passengers’ mobile devices, Polymer Dispersed Liquid Crystal self-dimming glass in the rear windows and panoramic roof, and active wheels that feature a motorized inner disc that rotates to close off open spaces and further improve aerodynamics at high speeds.