Over the weekend, Hollywood visual effects director Todd Vaziri (you’ve undoubtedly seen his work in films like Avatar, The Avengers and Star Wars: The Force Awakens) made a casual and rather interesting observation about Donald Trump’s tweeting habits.

After looking at two months worth of Trump tweets, Vaziri noticed that most of Trumps more abrasive and hyperbolic tweets were sent from Android devices. On the flip side, Trumps more benign postings tended to come exclusively from iPhone devices.

Every hyperbolic tweet is from Android (from him). pic.twitter.com/GWr6D8h5ed

With that theory as a jumping off point, data scientist David Robinson of Stack Overflow decided to perform a fascinating statistical analysis of Trump’s tweets and see firsthand what the cold hard data revealed.

Upon analyzing which words were more likely to come from either smartphone, Robinson’s research yielded the following chart. 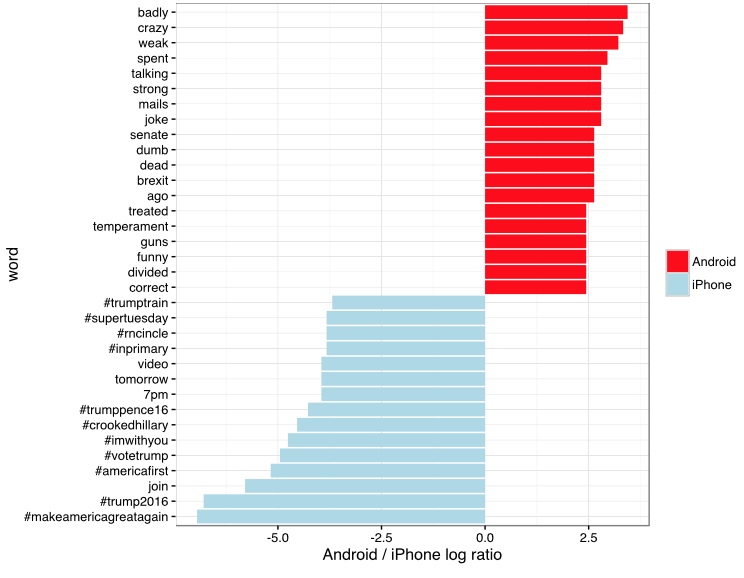 “A lot of emotionally charged words, like “badly”, “crazy”, “weak”, and “dumb”, were overwhelmingly more common on Android,” Robinson writes. “This supports the original hypothesis that this is the “angrier” or more hyperbolic account.”

Diving deeper, Robinson next utilized the NRC Emotion Lexicon to more closely evaluate the word usage across each mobile device and associate it with a particular emotion. Ultimately, Robinson found that “Trump’s Android account uses about 40-80% more words related to disgust, sadness, fear, anger, and other “negative” sentiments than the iPhone account does.”

Of course, the take away here isn’t that Trump magically transforms into a benign tweeter once he picks up an iPhone. On the contrary, it’s pretty clear that there are two people who have access to Trump’s Twitter account: Trump, of course, who tweets from his own personal Android device and a Trump staffer who tweets from an iPhone.

What makes Robinson’s work so fascinating is that he wrote his own code to analyze all aspects of Trump’s tweets across each mobile platform and then utilized some ole’ fashioned statistical analysis to draw his conclusions. Make sure to hit the source link below for more information about Trump’s tweeting habits along with a deeper dive into the statistical methods Robinson used in order to churn out this fascinating piece of work.

Tweet
Google has a new plan to bring gigabit internet to your home, and it doesn’t involve wires