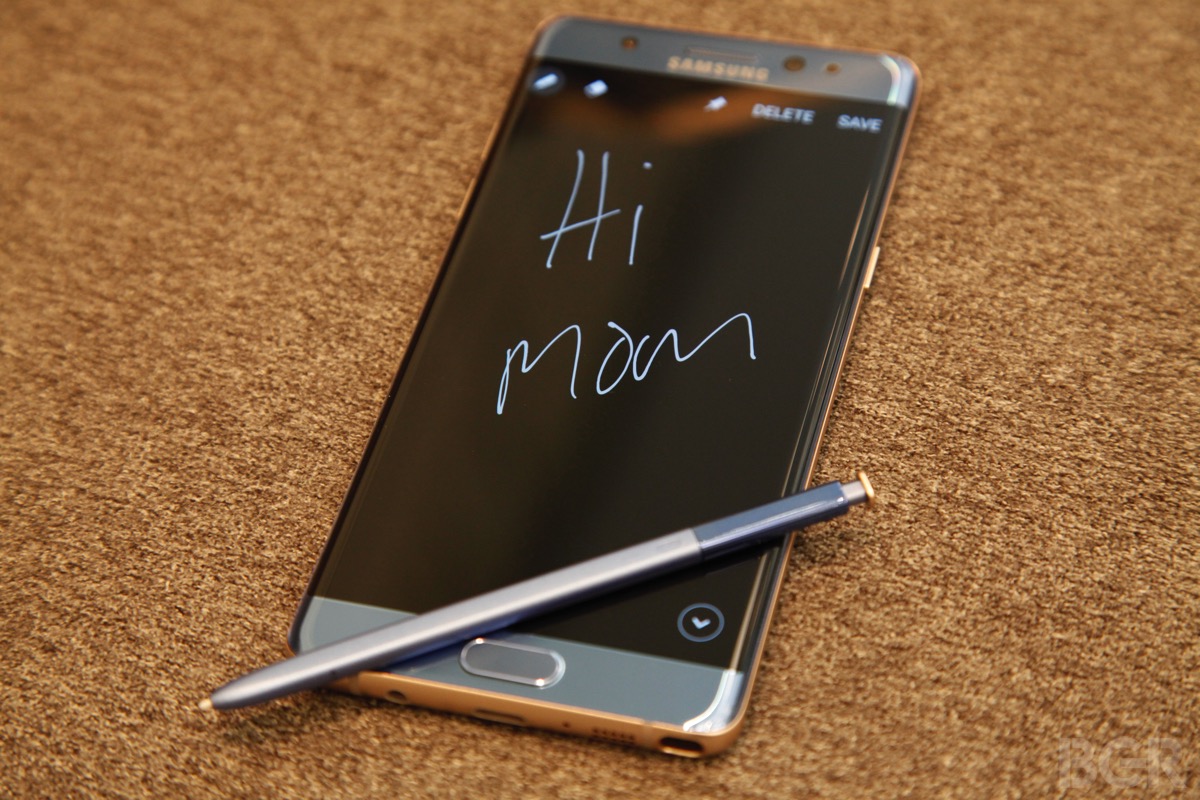 Not that there was much mystery to begin with following weeks of leaks and rumors, but Samsung’s Galaxy Note 7 is finally official. The new flagship phablet was unveiled just moments ago during a press conference at New York City’s Hammerstein Ballroom, and Android fans certainly seem to like what they see. Samsung’s latest and greatest features cutting-edge specs and a sleek design that improves upon last year’s Note 5, but it also has something else that its biggest rival does not: An awesome set of special features that make great use of its large size.

As I mentioned in my Galaxy Note 7 hands-on preview — and as I’ve discussed numerous times since late 2014 with the iPhone 6 Plus debuted — Apple’s iPhone phablets are bigger solely for the sake of being bigger. People wanted larger iPhones so Apple made a larger iPhone. The 6 Plus and 6s Plus don’t include a single new feature that makes use of the phones’ larger form factor.

On the other hand, Samsung is a seasoned pro when it comes to phablets and the new Galaxy Note 7 is packed full of phablet-specific features. There are also some fantastic general features that you won’t find on any iPhone, and in this post we’ll take a look at the 10 best ones.

Sure there are styluses that can by purchased separately and used with the iPhone 6s Plus, but none of them offer the experience or deep software integration afforded by the Galaxy Note 7.

The S Pen experience on the Note lineup has always been terrific, and it’s better than ever on the Note 7. Refinements include the consolidation of all of Samsung’s different note-taking apps into one “Samsung Notes” app, new Air Command features like translate and magnify functions, the ability to select a video and easily convert it into a GIF, and more. The stylus itself is also new and improved, with a .7mm tip that feels almost like a ballpoint pen as you write.

Another great feature you won’t find on the iPhone is Samsung’s Always-On Display (AOD), which keeps most of the screen off while the phone is asleep but displays certain information that can be customized to suit your needs. For example, you can display a clock, a calendar, notifications, and so on.

Which brings us to our third feature…

This is easily one of my favorite new Galaxy Note 7 features.

When the phone is asleep and you remove the S Pen stylus, you can instantly begin writing a memo on the display without waking up the phone. The photo at the top of this article shows you what it looks like — but that’s not even the best part. Once you’ve written your note, you can pin it to the AOD display. So, for example, you can write out a shopping list and then pin it to your AOD so you don’t even have to wake your phone as you make your way around the supermarket.

It’s incredible how far past Apple the company’s rivals have pushed when it comes to display quality. There’s just no reason Apple should still be using LCD panels. The iPhone 6s has a solid screen, but it doesn’t compare at all to the deep blacks and wonderful contrast offered by Samsung’s Super AMOLED panels.

Sticking to the screen for a bit longer, display resolution is another area where Apple has fallen far behind. The iPhone 6s has a 720p screen — 720p! — and the 6s Plus has a 1080p display. Meanwhile, Samsung’s quad HD displays offer a viewing experience that is far more clear and crisp.

Apple might have popularized the idea of including a fingerprint scanner on a smartphone, but Samsung took things to the next level with its new iris scanner. In the blink of an eye (pun intended, sadly), the Galaxy Note 7 can scan your irises using a dedicated front-facing camera coupled with a special infrared sensor. The new feature cannot be spoofed with a photo, and it can be used to unlock the phone, authenticate a mobile payment, or grant access to the Secure Folder.

What was that last thing mentioned above? The Secure Folder is an awesome new feature that lets Note 7 users store sensitive files in a special encrypted folder that has an extra layer of security protecting it. This way you can unlock your phone and share it with friends or family members without giving them access to your sensitive data.

Another cool feature of the Secure Folder is the fact that it’s not just for things like photos and passwords. You can actually install an instance of any app within the secure folder, and it will then be protected by that second layer of security. So for example, you can have your personal Gmail account in the main Gmail app installation, and then install another instance of Gmail in the Secure Folder for your work email

Last but certainly not least, the Note 7 includes a massive 3,500 mAh battery supported by a power-sipping processor, three different power saving modes and fast-charging technology that refuels the handset’s battery faster than any iPhone. That compares to a 2,750 mAh battery in the iPhone 6s Plus, which has one basic power saving mode and no support for fast-charging tech.