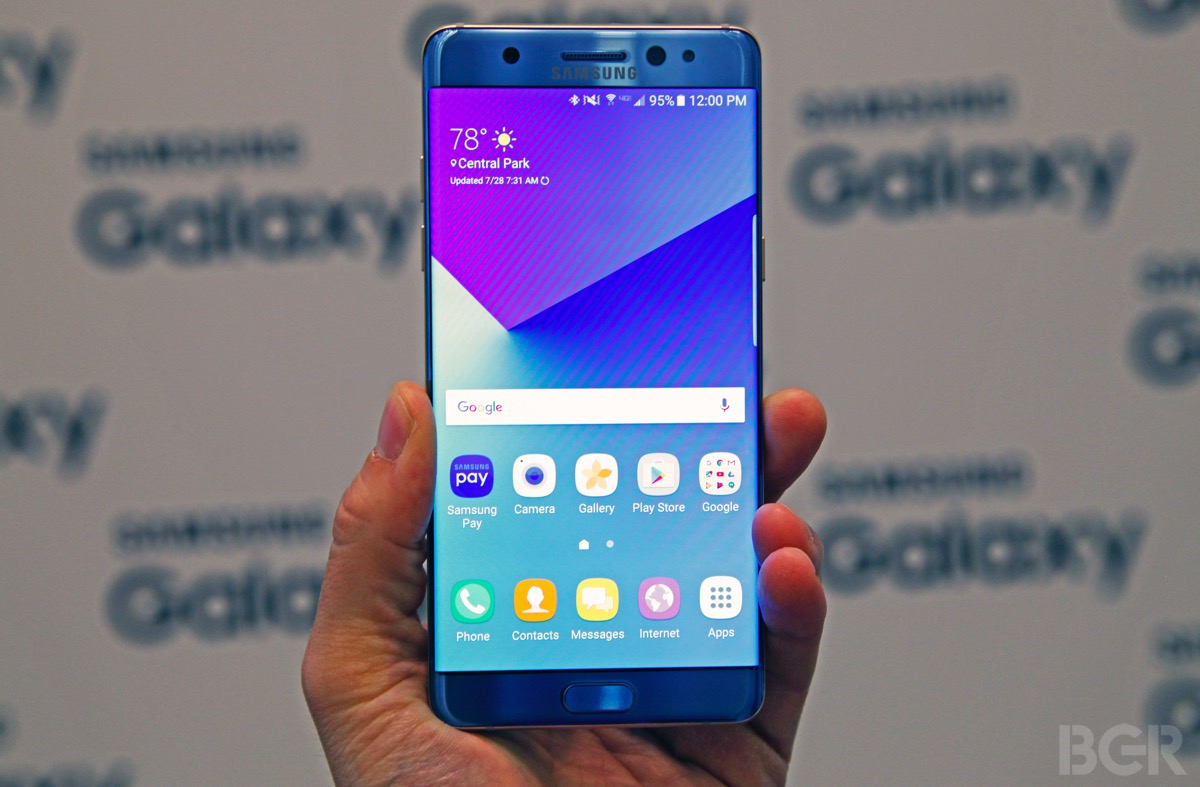 When Apple first released its larger iPhone 6 Plus to appease smartphone fans who were clamoring for iPhones with larger displays, I personally wasn’t impressed. I’ve written about the reason why a number of times but to recap briefly, Apple’s iPhone 6 Plus and iPhone 6s Plus are just bigger iPhones. That’s it. There are no exciting features unique to Apple’s phablet line (unless for some reason you’re excited by optical image stabilization), and there are no differences in the phone’s design. It’s just bigger for the sake of being bigger. Apple knew people wanted a bigger iPhone, so it built one without putting any effort at all into differentiating it or making use of the additional size.

Samsung, on the other hand, is the best in the business when it comes to the phablet market. Its flagship phones aren’t just bigger for the sake of being bigger, they add a wide range of exciting features that make use of that added size and display real estate. Never has that been more true than it is now, with the brand new Galaxy Note 7 unveiled on Tuesday.

Samsung finally took the wraps off the hotly anticipated Galaxy Note 7 this morning, and nothing shown off on stage at New York City’s Hammerstein Ballroom came as much of a surprise to Android fans. Leaks leading up to the event revealed just about everything there was to know about the new Note 7, as has been the case with other recent flagship phones.

Of course, as has also been the case in the past, leaks never do a good job of painting a complete picture of the experience afforded by a new smartphone. I spent some time with the new phone ahead of today’s announcement though, and I came away very impressed.

Samsung’s new Galaxy Note 7 features a design that is similar in many ways to last year’s Galaxy Note 5. As a brief aside, you’ll notice that Samsung skipped the “Galaxy Note 6” name in order to bring its Note flagship line up to speed with its Galaxy S lineup. Samsung released the Galaxy S7 and Galaxy S7 edge earlier this year, and now the Galaxy Note 7 will join those models.

While the Note 7’s design and shape are strikingly similar to last year’s flagship phablets, there are some subtle differences. My favorite among them are the symmetrical curved glass on the front and back of the handset, and the smaller overall footprint that was achieved without decreasing the size of the display.

Regarding that curved screen, some Samsung fans will be upset to learn that there is no Galaxy Note 7 with a flat display. Recent leaks and rumors suggest that there will be a second version released at some point in the near future, but Samsung isn’t announcing anything at this time. The curve on the Note 7 is shaped a bit differently than last year’s Galaxy S6 edge+, which launched alongside the Note 5 as a curved-display version with no stylus. The curved area on the Galaxy Note 7 occupies less of the phone’s face, and it slopes more quickly toward the outer edges of the handset.

The sloped glass on the back of the phone mirrors the front this time around, and the result is a phone that feels remarkably comfortable in the hand for such a large device. Many people will still find it tricky to use with one hand though, which is why Samsung has a special feature that shrinks down the size of the display to make it usable with one hand.

Inside, the Galaxy Note 7 features a 64-bit quad-core processor with two 2.15GHz cores and two 1.60GHz cores. As a result, the phone can sip power slowly when the user isn’t doing anything too complex, or it can kick things up a notch when an app needs more power.

Two things need to be called out from within those specs: the first is the fact that the phone only comes in one storage size, 64GB. The second is the rear camera, which is the exact same camera as the one in the Galaxy S7. The S7’s camera is the best the world has ever seen on a smartphone in my opinion, but at the same time, Samsung historically offers some upgrades with each new model.

There’s plenty more to discuss beyond the Galaxy Note 7’s specs, of course. The S Pen stylus is new and improved, offering a writing experience similar to a real ballpoint pen; there are a bunch of new S Pen-specific features and enhancements like the ability to quickly select a video clip and convert it into a GIF; there’s a remarkably fast iris scanner that lets users unlock the Note 7 or authenticate mobile payments; and more. Since I only spent a short amount of time with the phone though, I’ll wait for the full review before diving in too deep.

Samsung’s new Galaxy Note 7 becomes available for preorder tomorrow, August 3rd. Customers who preorder the phone will also be able to choose a nice bonus along with their purchase — either a free 256GB Samsung microSD card or a free Gear Fit2. The phone will then be released on August 19th, and will be available from a wide range of retailers including all four major US wireless carriers and U.S. Cellular. Samsung’s Galaxy Note 7 will be sold in three colors in the US market, including silver, black and Blue Coral with rose gold metal around the edges of the phone.

As always, pricing will vary by carrier and will be announced by each wireless provider individually, likely at some point Tuesday morning.

Also up for preorder beginning tomorrow is a new and improved Gear VR virtual reality headset, which still costs $99. The new model features a tweaked design with a larger flush trackpad and a dedicated button for accessing the Oculus VR store, a new USB-C connector, and it also increases the field of view from 96 degrees to 101 degrees.

The new Gear VR will also launch on August 19th alongside wider availability of the $349 Gear 360 camera.