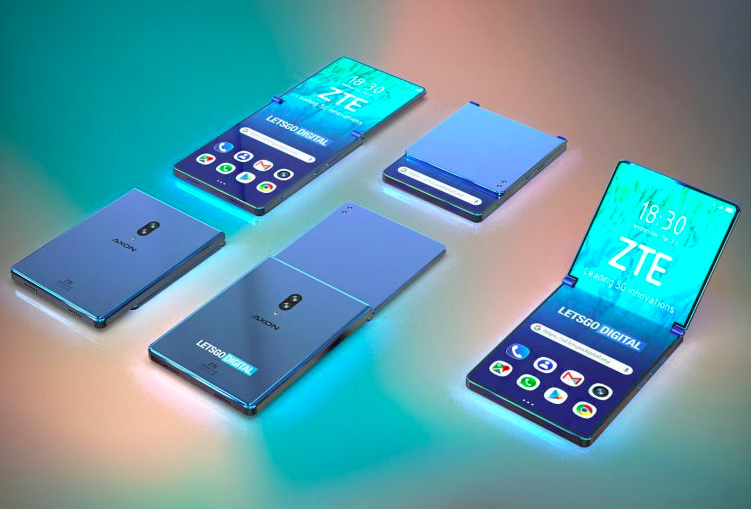 Chinese smartphone maker ZTE has previously patented a design for a horizontally folding tablet-like device, and it now it seems the brand may also be considering a foldable display for use in an upcoming smartphone design.

A new patent filing has been published suggesting as much and is already leading to speculation that whatever ZTE ultimately moves forward with could end up going head-to-head with the forthcoming Motorola RAZR once it’s released. At any rate, the main thing to note in the new ZTE patent is the design that unfolds to give the user a long screen, as opposed to a tablet-style surface as seen in the design of the Samsung Galaxy Fold and Huawei Mate X.

Motorola has been rumored to be pursuing a clamshell model for the RAZR, and Samsung is looking at this for a forthcoming handset, as well. It should be noted that what ZTE’s new design patent shows, however, is not a clamshell in the purest sense.

Dutch tech blog LetsGoDigital got its hands on the patent documentation, which was filed on March 5 with the Global Design Database of the World Intellectual Property Office and includes a dozen sketches. They show the fold as being not exactly in the middle of the device, so that when the upper part is folded down over the phone, there’s a small bit of the phone that remains visible at the bottom. Presumably as a display surface for things like notifications and messages.

Another feature of the design worth noting is that the bottom portion looks to be thicker than the shorter top half, meaning the heavier part will be what you’re holding. When you flip it open, you’ll see screens with narrow edges, and there’s a notch on both sides of the display where the phone folds.

ZTE seems to be going down this road because most of the competition is — all of the big smartphone makers are either moving forward with plans for specific foldables or are experimenting with the design — and it desperately needs to keep pace. The company’s sales barely show as a blip in its home market of China, accounting for some 1% of sales there. The company has branched out, however, and made more of a stronger showing in markets like Japan and Europe. The patent is not a guarantee this device will ever be commercialized, but it does give an indication that the company is watching the market trends and figuring out where it can make a move.