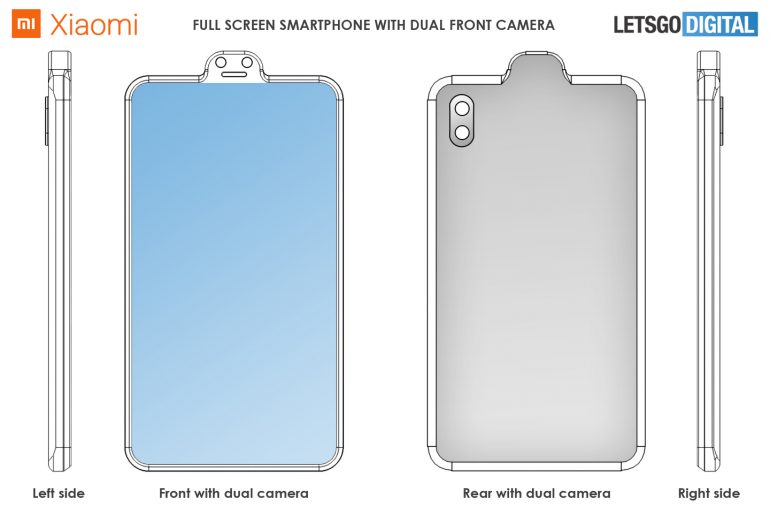 Following the introduction of the iPhone X two years ago, smartphone manufacturers keep finding new ways to give users incrementally more screen real estate in part by housing front-facing sensors in a small notch at the top of the phone, with some notches as small as the shape of a teardrop. It’s a design that’s more a function of limited space options, and not so much a reflection of this being a design choice that users actually want, which is why we’ve seen handset makers experiment a bit with the positioning and shape of the notch over time.

Which leads us to a new smartphone concept design just patented by Xiaomi. The Chinese brand has decided to try something new along these lines, which you can see in the image at the top of this post — it’s an inverted, “reverse” notch that’s basically a bump protruding out from the top of the device. It houses a dual camera and receiver — but hey, Xiaomi apparently wants you to think. At least you’ve got a tiny bit more screen now where that notch would have gone.

The design for this was spotted by Dutch tech news blog LetsGoDigital, which reports that Xiaomi’s patent was published just a couple of days ago. The patent depicts three different model designs, all of which have the protruding notch that the site describes as looking “somewhat comical,” according to an English translation. If you look at the image at the top of this post, of the phone in blue on the left, the protruding notch actually looks like a face.

Chinese phone manufacturers like Xiaomi are experimenting more and more these days, with an earlier Xiaomi design in fact housing the selfie camera at the bottom of the display. In terms of this new patent, there are some differences across the three designs, such as in the placement of the front camera and receiver being either closer or farther apart. The phone also has a double camera setup on the back.

Again, this is just a design patent, so it’s not an indication the Chinese company will definitely move forward with the design in the form of an actual phone. It does indicate, as we said, a growing sense of experimentation coming out of Asia, with Xiaomi earlier this year also patenting a 4-sided edge display and rival Oppo likewise trying its hand at new designs.