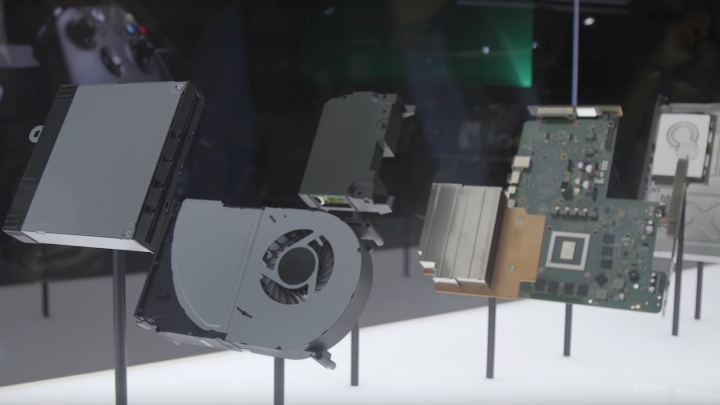 As expected, Microsoft spent a good bit of time during its 2017 E3 showcase talking about how awesome its new Project Scorpio – sorry, Xbox One X — is. It’s an extremely powerful console, and it carries a high price tag to match, but what exactly are you getting for your $500? As it turns out, Microsoft was pretty proud of what it packed inside the tiny black box, and provided E3 goers with a lovely exploded view of all the Xbox One X system components.

The video, shared by GameSpot, shows all the bits and pieces that make the Xbox One X what it is. You’ve got the case, sizable case fan, internal power supply, 4k-capable Blu-ray disc drive, and of course the motherboard. There’s also some nice heat shielding and various other bolt-ons. Given that the Xbox One X is the smallest Xbox the company has ever produced, it’s pretty cool that Microsoft took the time to provide a look at the guts — well in advance of the product launch and eventual iFixit teardown.

The original Xbox One was a massive beast, and many fans and analysts chalked up its huge footprint to Microsoft being overly cautious so as not to repeat the infamous overheating and Red Ring of Death scenario that plagued the Xbox 360. Now it seems that, if the company really was playing it super safe with the design of the original One, it has since regained its comfort level with sleek, compact designs. The Xbox One X will launch later this year.