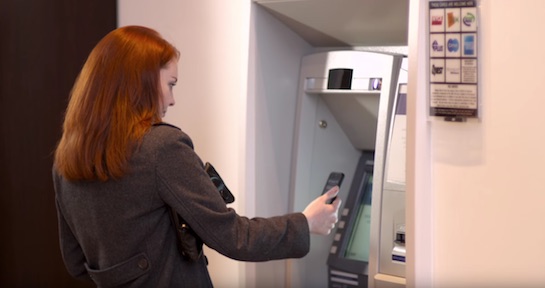 ATMs are one of the worst places for stealing card details. It’s easy to attach skimming devices to clone the magnetic strip, and because they’re normally on the street without human supervision, there’s no real security against hacking.

But what if you took card-to-machine contact out of the equation altogether? That’s what Apple and banks are trying to do with TouchID cash withdrawals, and after an initial rollout with Bank of America, the scheme is about to go live across the nation.

Apple announced the first TouchID-enabled ATMs in partnership with Bank of America earlier this year, but a new announcement from FIS and Payment Alliance International should make this much more common. The groups are in charge of 70,000 contactless-capable ATMs across the country, and Apple Pay should be coming to all of them.

The solution is powered for consumers by the FIS app. The company explains:

FIS Cardless Cash protects consumers by reducing risk of card skimming and shoulder surfing, both of which are on the rise at ATMs, according to industry data. By leveraging FIS Mobile Banking with TouchID, customers securely access their funds and authorize the amount they want without inserting a plastic card into an ATM. The mobile banking app acts as a remote control for the ATM, providing unparalleled privacy and security for consumers. Customers using FIS Cardless Cash can complete their withdrawals in 10 seconds and get an electronic receipt on their smartphone.

It won’t be as familiar as using a plastic card, and if the switchover to chip cards is teaching me anything, it’s that people really hate new stuff. But long term, the advantages are huge, since it’s a far more secure method of withdrawing cash. Card cloning could finally become a thing of the past.