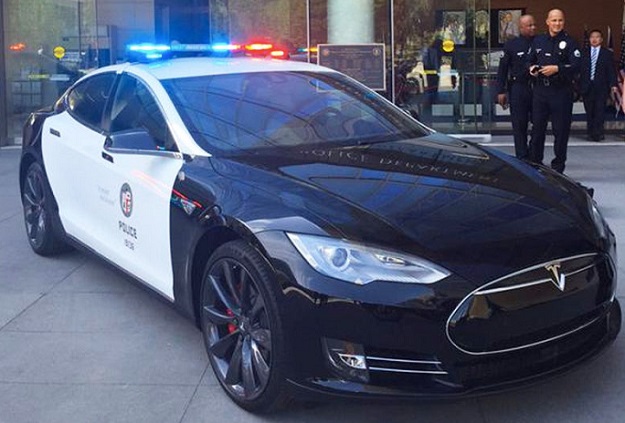 A few months ago, we reported that the Los Angeles Police Department was contemplating adding a few Tesla Model S vehicles to their fleet. With Tesla loaning the LAPD two Model S P85D vehicles for evaluation, LAPD Police Administrator Vartan Yegiyan explained that the underlying goal was to determine how the luxury sedan would perform in a city environment and to ascertain any benefits and drawbacks it would introduce as an everyday patrol car.

What’s more, the LAPD also indicated that they were evaluating the Tesla Model S’ capabilities as a high-pursuit vehicle, altogether not terribly surprising the Model S’ reputation for speed.

Now comes word via NBC Los Angeles that the LAPD’s flirtation with Tesla is progressing quite a bit. Whereas the LAPD previously conducted private testing with the Model S, the latest report relays that the LAPD will now be outfitting a Model S with police equipment and electronics whereupon it will actually use it as a patrol car in the real world.

As part of the LAPD’s effort to become more environmentally friendly, NBC notes that the “LAPD will equip a Tesla sedan for patrol duty and then field test its suitability.” Tesla will reportedly assist the LAPD in its efforts to outfit the Model S with all the requisite police gear.

If all goes according to plan, Yegiyan said that he hopes to have an operational Model S in the field as early as 2017.

The LAPD of course is no stranger to EVs. This past summer, the police department acquired 100 BMW i3s for non-emergency situations. The LAPD notes that while the i3s are helpful, they lack the requisite power and range that the LAPD needs from field-ready patrol car.

Should the Model S perform well, we still shouldn’t expect to see the LAPD fleet become Tesla heavy anytime soon. Yegiyan explained that Tesla’s today are still too expensive but added that once the cost of the cars go down, the LAPD will be ready.