Over the weekend, a Tesla Model S 90D in France while it was being taken out for a test drive. In a post originally published to Reddit, the Model S was driving along with three passengers in the car when, all of a sudden there was a loud noise followed by a message on the dash which said, “Problems with charging.”

The driver of the vehicle promptly pulled over and, as the story goes, the car caught fire just one minute later. The photo below was taken after all of the passengers had safely exited the vehicle. Ultimately, the fire department came and managed to put the fire out. 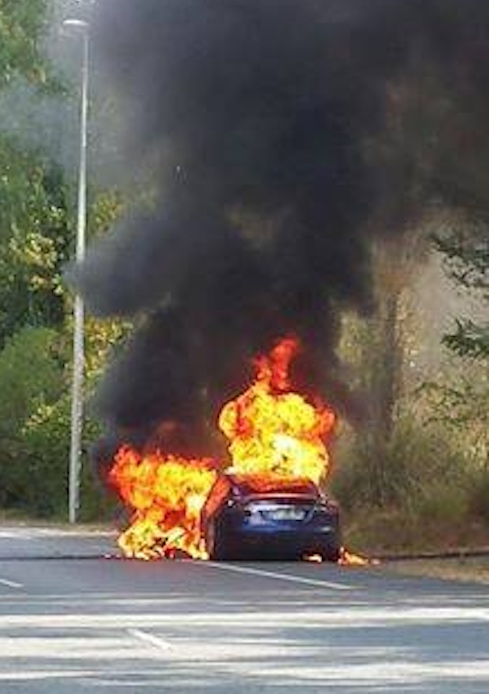 It’ll be interesting to see if and when Tesla issues an official explanation for the fire. While a car catching on fire when involved in an accident is nothing new, a car spontaneously combusting into flames — while on a test drive, no less — is certainly cause to raise an eyebrow or two.

That said, it will also be interesting to see if the “Teslas are unsafe” narrative rears its ugly head yet again. Remember, of all the scandals that we’ve ever seen hit the auto and tech industry, perhaps no scandal was more overblown than the fear-mongering rumors that Tesla vehicles were more prone to catching fire than their internal combustion engine counterparts. This narrative really seemed to needle Elon Musk who, in the wake of such accusations, would often tweet things like, “Why does a Tesla fire w no injury get more media headlines than 100,000 gas car fires that kill 100s of people per year?”

In October of 2013, for example, following a Tesla which got into an accident and caught on fire, the negative press surrounding Tesla was all-consuming, prompting Musk to address the issue and impart some perspective on the matter.

Had a conventional gasoline car encountered the same object on the highway, the result could have been far worse. A typical gasoline car only has a thin metal sheet protecting the underbody, leaving it vulnerable to destruction of the fuel supply lines or fuel tank, which causes a pool of gasoline to form and often burn the entire car to the ground. In contrast, the combustion energy of our battery pack is only about 10% of the energy contained in a gasoline tank and is divided into 16 modules with firewalls in between. As a consequence, the effective combustion potential is only about 1% that of the fuel in a comparable gasoline sedan.

The root cause of the fire hasn’t yet been disclosed but Tesla claims that it’s investigating the matter.