For as much as Tesla likes to make a big deal about how fast its cars are, it’s easy to forget that Tesla vehicles are some of the safest cars on the planet. In light of that, it shouldn’t come as much of a surprise that Tesla’s Model 3 recently received a perfect 5-star safety rating from the National Highway Traffic Safety Administration (NHTSA). Indeed, the Model 3 received 5 stars across every tested category, including side crash, frontal crash, and rollover scenarios.

Still, there’s no denying that every accident involving Tesla tends to be front-page news, a dynamic which Tesla CEO Elon Musk naturally abhors. “It’s super messed up that a Tesla crash resulting in a broken ankle is front page news and the ~40,000 people who died in US auto accidents alone in past year get almost no coverage,” Musk quipped via Twitter a few months back.

While there are certainly legitimate qualms to be had with Tesla’s Autopilot feature as it pertains to safety — though this has as much to do with Tesla owners misusing the feature as anything else — the bottom line is that Tesla vehicles are designed and engineered from the ground up with hardcore safety in mind.

To this point, the NHTSA recently revealed that the Model 3 has the lowest probability of injury across all cars. Tesla naturally highlighted the NHTSA’s findings in a new blog post over the weekend. Put simply, passengers involved in a crash are less likely to be injured if they happen to be riding in a Model 3.

In addition to its near 50/50 weight distribution, Model 3 was also designed with an extremely low polar moment of inertia, which means that its heaviest components are located closer to the car’s center of gravity. Even though Model 3 has no engine, its performance is similar to what’s described as a “mid-engine car” due to its centered battery pack (the heaviest component of the car) and the fact that Model 3’s rear motor is placed slightly in front of the rear axle rather than behind it. Not only does this architecture add to the overall agility and handling of the car, it also improves the capability of stability control by minimizing rotational kinetic energy.

Like Model S and Model X, Model 3 benefits from its all-electric architecture and powertrain design, which consists of a strong, rigid passenger compartment, fortified battery pack, and overall low center of gravity. These safety fundamentals help to prevent intrusion into the cabin and battery modules, reduce rollover risk, and distribute crash forces systematically away from the cabin – all while providing the foundation for our superior front crumple zone that is optimized to absorb energy and crush more efficiently…

We also added state of the art features and new innovations in crash structure design, restraints and airbags, and battery safety to the core of Model 3’s design:

And because a picture is worth a thousand words, the chart below is quite telling. 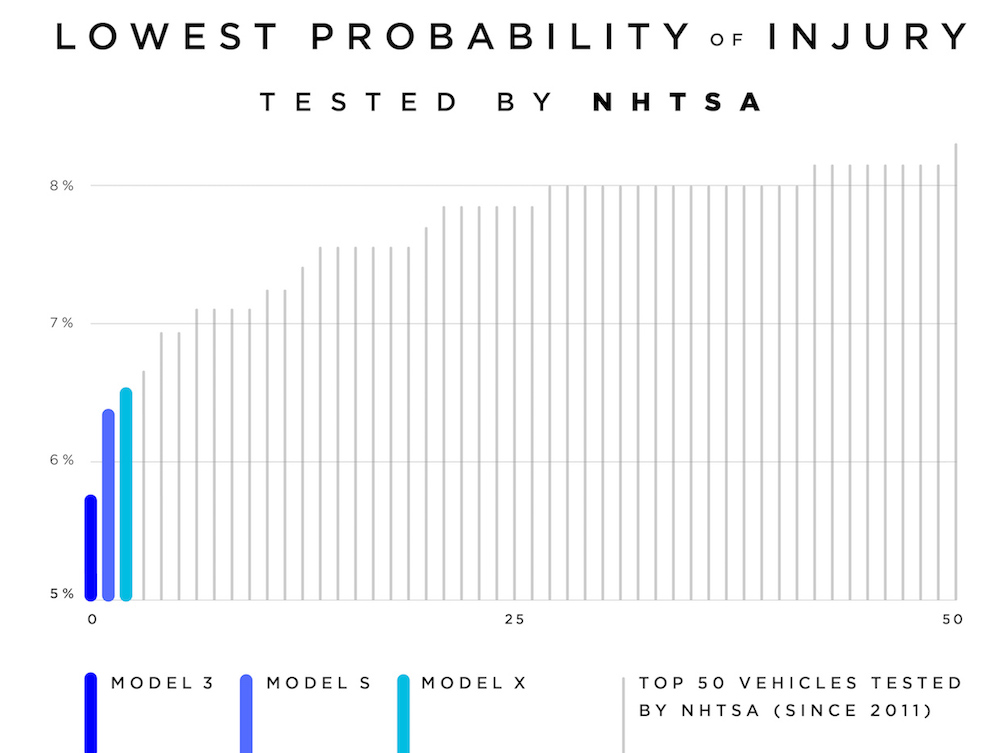 Tesla’s full blog post, which contains a lot of interesting technical details about the Model 3 design, can be read over here.