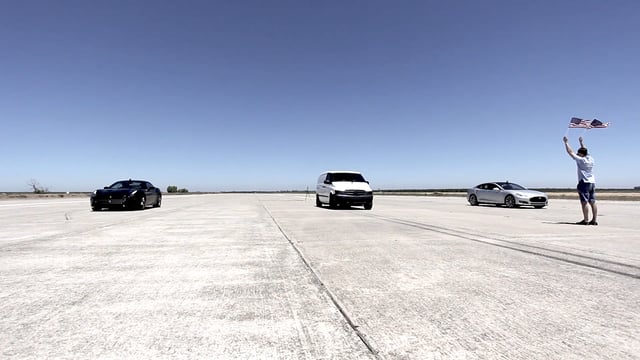 It has all the makings of a good drag race — a Tesla Model S versus a Ferrari. So why is there a van sitting on the start line as well?

Atieva is an electric car startup that’s hoping to produce a luxury sedan by 2018. But along the way, it appears to have been sidetracked into making an electric van. A very fast electric van, as the aforementioned drag race demonstrates.

DON’T MISS: The iPhone 7 might be the first iPhone with decent battery life

The van is codenamed “Edna,” and exists as a testbed for the company’s electric platform:

“Under Edna’s skin are two electric motors, two sets of power electronics, two gearboxes, one battery capable of storing 87 kWh of energy and outputting over 900 horsepower, plus all of the software to make the components play nicely together. With Edna we are able to test various aspects of the powertrain system, including motor control algorithms, regenerative braking behaviors, accelerator pedal feel, and cooling strategies, to name a few.”

It also enables them to make a video showing a van beating a Tesla Model S, which isn’t exactly bad PR. Mind you, the 3.08 0-60 time claimed for Edna is behind the P90D Ludicrous’s 2.6-second 0-60 time, so a version of this race run on Tesla’s terms would look quite different.

Atieva, which features a former Tesla Model S Chief Engineer as one of its executives, is working to bring a luxury electric sedan to market by 2018. It seems serious about the idea, having already raised significant funding and received permission to build a half-billion-dollar electric car factory in California.