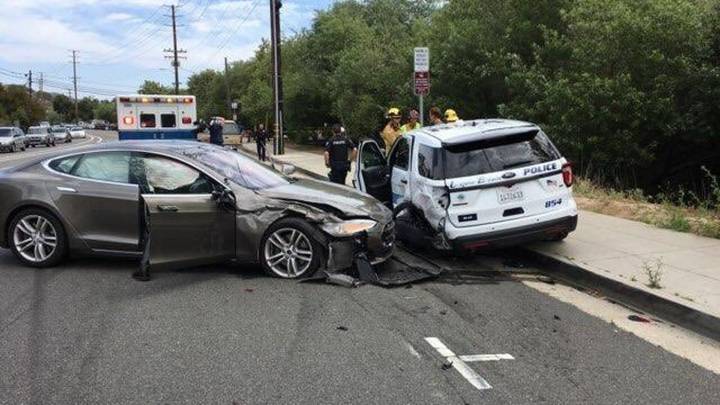 A Tesla Model S with the Autopilot driver assist engaged crashed into a stationary police vehicle in Laguna Beach, California, earlier today according to the local police department. The crash comes just weeks after another Tesla, also in Autopilot mode, crashed into a stationary fire truck in Utah. No one was seriously injured in either incident, but the increased attention on Tesla’s Autopilot features worked Tesla CEO Elon Musk into a Twitter fury, and has raised questions about Autopilot’s real-world usage.

The collision happened at 11:07AM local time, Laguna Beach PD told the LA Times. The officer was not in the police vehicle at the time, and the Tesla driver suffered “minor injuries,” according to the police.

“Thankfully there was not an officer at the time in the police car,” Laguna police Sgt. Jim Cota told the LA Times. “The police car is totaled.” Cota added that another collision took place in the same area last year, involving a Tesla vehicle running into a semi truck. “Why do these vehicles keep doing that?” Cota said. “We’re just lucky that people aren’t getting injured.”

“Autopilot” is the commonly-used term for Tesla’s entire suite of semi-autonomous driving features, but it’s not clear exactly how the car was being controlled at the time of the crash. Autopilot might only refer to semi-adaptive cruise control, which maintains speed with the vehicle in front, or it could mean that the Tesla had Autosteer engaged, in which case it would be steering itself based on the road markings. Autosteer is only supposed to be engaged on highways or limited-access roads, according to Tesla, and drivers are supposed to remain aware the whole time behind the wheel.

If Autosteer was being used, then it was outside of its intended environment, which could explain why the crash occurred. However, there’s a definite trend emerging of Tesla vehicles colliding with stationary vehicles, which raises obvious questions about the system’s real-world safety, and whether Tesla needs to do more to ensure drivers aren’t overly reliant on a system that they describe as being in beta.