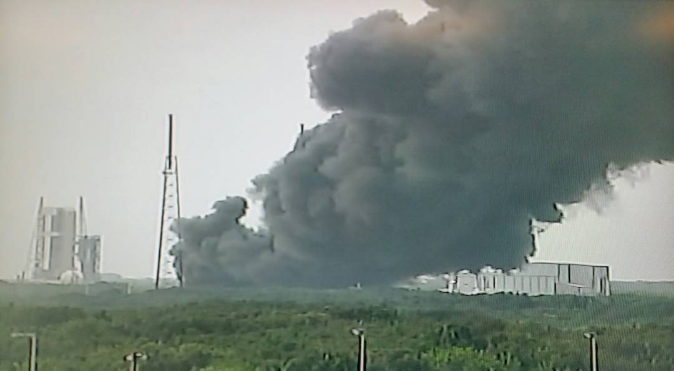 Photos and videos have begun to flood social media sites like Facebook and Twitter following reports that a SpaceX Falcon 9 reusable rocket exploded on a SpaceX launch pad at the Cape Canaveral Air Force Base in Florida. The news has not yet been confirmed by SpaceX, and it is unclear if there were any injuries as a result of the blast. There was no rocket launch planned to take place today, though it’s likely that the company was making preparations for its next scheduled launch in just two days on Saturday, September 3rd.

According to unconfirmed reports, SpaceX was in the process of static firing the Falcon 9 rocket when it exploded on the launch pad. The test firing was being performed in preparation for Saturday’s launch. Several independent reports state that the explosion was so big that it shook nearby office buildings as far as several miles away. The rocket was scheduled to carry an Israeli satellite into space when it launched this weekend.

According to the Associated Press, there were actually multiple explosions that continued for several minutes following the initial blast. The AP also confirms that the Falcon 9 rocket was unmanned at the time of the explosion according to NASA.

Update 10:44 ET: SpaceX has briefly commented on the matter, confirming that an “anomaly” caused the rocket to explode. The pad was clear and there were no injuries.

Statement on this morning's anomaly pic.twitter.com/3Xm2bRMS7T

And a brief note from SpaceX CEO Elon Musk:

Here are photos and videos from the area surrounding the scene:

Just got this from KSC @WFTV pic.twitter.com/vK2FfLdrIC

For anyone who wondered why launch prep takes weeks & why no one is allowed near, this is why #Falcon9 #SpaceX pic.twitter.com/ukCPmAhOhD