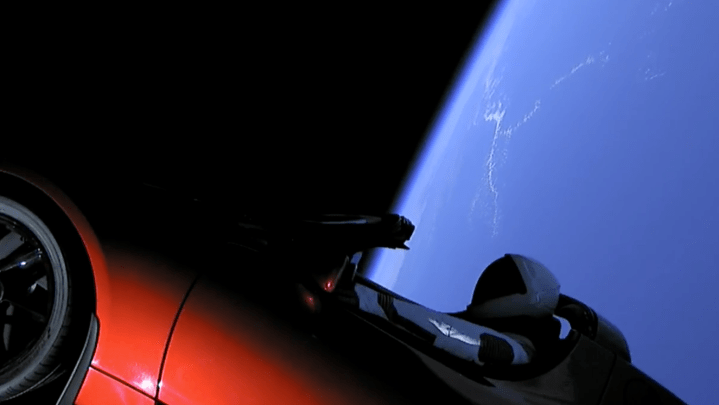 About a month ago, SpaceX made history when it launched the Falcon Heavy rocket into space. And while rocket launches in and of themselves are nothing new, what SpaceX did with the Falcon Heavy is truly something to marvel at. For starters, the Falcon Heavy is the most powerful operational rocket on the planet, with SpaceX noting that it has “more than 5 million pounds of thrust at liftoff, equal to approximately eighteen 747 aircraft at full power.”

The Falcon Heavy will ultimately be used to launch extremely heavy satellites into orbit and — assuming that colonizing Mars ever becomes a reality — carry thousands of pounds of cargo. In the interim, though, the inaugural payload of the Falcon Heavy was Elon Musk’s very own Tesla Roadster, comically ‘driven’ by a mannequin dubbed Starman.

A few weeks removed from launch, Starman and his trusty Roadster are still orbiting in outer space. And if you’re curious as to where the Roadster is at any given time, the website WhereIsRoadster can provide you with some up to date data. At the time of this writing, the Roadster is 5,962,089 miles away from Earth and 116,430,301 miles away from Mars. As a point of interest, SpaceX notes: “At max velocity Starman and the Roadster will travel 11 km/s (7mi/s) and travel 400 million km (250 million mi) from Earth.”

Over the weekend, SpaceX published a new video which contains some never before seen footage of the launch and the prep-work that went into making it a reality. Appropriately set to David Bowie’s Life on Mars, the video is quite breathtaking. Perhaps not surprisingly, it was put together by Lisa Joy and Jonathan Nolan of HBO’s Westworld.